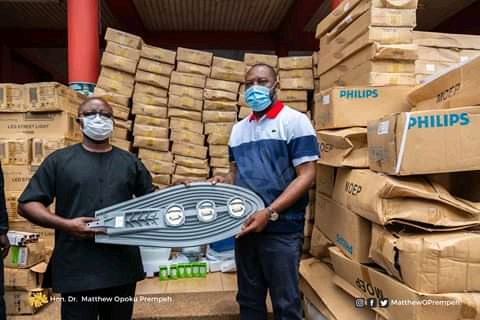 He extended this gesture as part of measures to help residents and the police ward off criminals in the constituency.

The Kumasi Metropolitan Assembly Chief Executive, Osei Assibey Antwi, together with some Assembly members in the constituency was present to receive the donation.

The brief ceremony was held at Ash-Town on Saturday, September 19, 2020.

Delivering a speech at the event, Dr. Prempeh said the donations are to beautify and aid in visibility and enhance security patrols in the constituency.

He told the gathering that he is committed and willing to do everything in his power to augment the efforts of the Assemblymembers in dealing with security challenges in the Constituency.

Prior to the donation, the MP had facilitated the installation of five astroturfs to unearth talents in the area of soccer.

He had also supported the Manhyia South sub-metro with tricycles and other equipment to support sanitation fight.

“I have pledged to serve my constituents and more developments are coming”,  Napo, as he is affectionately called, said while urging constituents to vote massively on December 7 to retain the New Patriotic Party in political office for four more years.

Ten thousand (10,000) pieces of energy-saving bulbs and 613 LED streetlight bulbs were distributed to six electoral areas in the constituency.

“With this, we will work our hearts out to reduce crime in our electoral areas. All polling stations will benefit from this largesse and we thank the MP for this kind gesture”, he added.

Metropolitan Chief Executive Osei Assibey Antwi who received the items on behalf of the Assembly also thanked Napo for the kind gesture and stressed the need to conserve energy wisely.