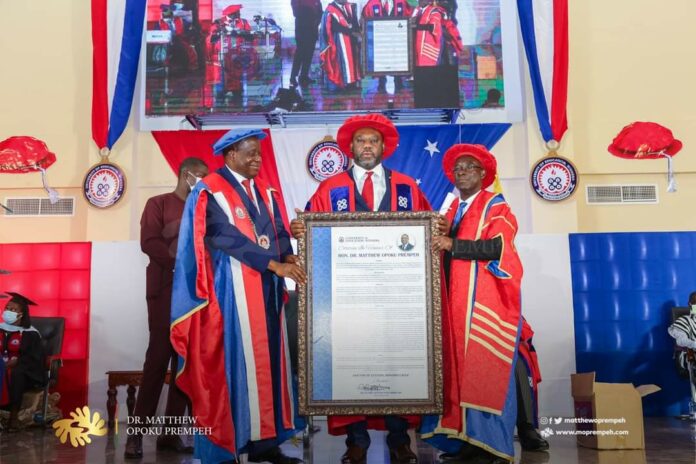 The University of Education, Winneba, (UEW) conferred the enviable award on him for the leadership that he exhibited as Education Minister, leading to the successful introduction of the policy.

Napo, who is the current Energy Minister, was honoured alongside former Speaker of Parliament, Prof. Michael Aaron Oquaye, who also took home an Honorary Degree for his support for education and the country at large.

In a citation that preceded the presentation of the award, Napo was described by the university as a bold, outstanding, intelligent and a visionary leader, who worked to positively change the education sector.

According to the university, the Free SHS policy had not been practiced in the country before, but Napo through hard work and commitment to duty, in 2017 successfully implemented the laudable policy in the country.

Napo was also praised for bringing total reforms in the area of Curriculum Review, Teacher Education, Licensure Programme, Capitation Grant, Teacher Pathways and GALOP, during his tenure as Education Minister.

The citation also highlighted other reforms Napo brought to the sector such as Teacher Promotion, Teacher Selection, Retention and Incentives and Technical, Vocational, Education and Training (TVET).

Prof. Oquaye’s citation particularly touched on his efforts to promote education in the country over the years, especially the numerous books that he has authored, hence the university’s decision to honour him with a degree.

A Special Congregation to honour the two distinguished dignitaries, held in the university’s campus at Winneba yesterday, was highly patronised by important personalities under strict Covid-19 protocols.

Top chiefs from Asanteman including Oheneba Owusu Afriyie VI, Otumfuo’s Apagyahene, Baffuor Agyei Fosu Twitwiakwa II and Nana Agyekum Kusi II, Oyokohene of Kumasi, were there to support Napo, who is their son.

President Akufo-Addo in a speech read on his behalf by the Chief of Staff, Akosua Frema Osei Opare, described Napo and Prof. Oquaye as “two illustrious sons of mother Ghana, who have over the years played significant roles to help bring the country to its present enviable status.”

“I have known and worked with these two outstanding sons of our country for sometime now and they deserve the awards,” he added.

According to the President, both Napo and Prof. Oquaye have played pivotal roles, which by far ensured the success story of his government.

Rev. Fr. Prof. Anthony Afful-Broni, Vice Chancellor of the university, said Napo and Prof. Oquaye have diligently served the country so the honorary doctorate degrees was to let them know the country appreciates their splendid works.

Chairman of the University Council, Prof. Obeng Mireku, particularly lauded Napo for his exemplary leadership, professionalism, patience and commitment to duty, which has led to the Free SHS programme to boost education.

Napo, who spoke briefly to journalists, said he was humbled for being honoured by such a top university and said the honour should rather go to President Akufo-Addo, for giving him the chance to serve in his government.

Prof. Oquaye said he and Napo were grateful to God and the university for realising their efforts to help take the country to the next level.

Jesus Christ was a Ghanaian – Anthropologist