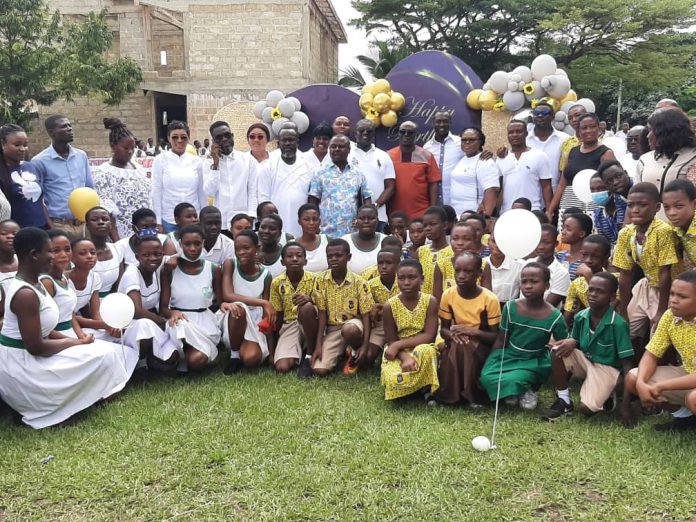 Member of Parliament for Manhyia South in the Ashanti Region, Dr. Matthew Opoku Prempeh, turned 54-years-old on Monday, May 23.

Napo, as he is affectionately called has been showered with love and well wishes from people from all walks of life, especially from social media users.

Members of the ‘Friends of NAPO’, however, took it a step further as they presented teaching and learning materials to all basic schools in the lawmaker’s constituency, to mark this milestone.

A brief ceremony was held at the premises of the Roman Catholic Primary and JHS. Items donated by the group which included the New Patriotic Party executives in Manhyia South were thousands of branded exercise books, pens, and sewing machines, among others.

Nana Timmah Boakye who spoke on behalf of ‘Friends of NAPO’ said, “we are here to donate these items to the schools and by it honour our favourite MP who is celebrating his 54th birthday today”.

“Everybody who has encountered him knows that he loves children and he is so committed to education and wants to help improve the lives of his people all the time. And that is why the constituency has witnessed massive projects initiated by the MP”, Timmah said as she urged the pupils to take their lessons seriously to become responsible citizens in future.

The New Patriotic Party Chairman for Manhyia South, Richard Adjei Mensah Ofori-Attah, used the occasion to highlight the projects initiated by the lawmaker, pledging to support him to improve the lives of the people in the constituency.

He also prayed for long life and favour from God for the country’s Energy Minister, who was recently adjudged the best cabinet Minister under the Akufo-Addo administration, a feat he has chalked for three times.

The school’s break time was a period of eating and dancing as pupils from the 12 schools praised Napo for the kind gesture.

12-year-old Daniel Yeboah, a JHS pupil at St. Anne’s Anglican School said: “This is not the first time I have received such a donation from the MP. He always inspires me and I want to use this occasion to wish him well.”

The legislator whose attention was drawn to the honour done him, after a post by the Dichemso M/A JHS, flooded the pictures on his Facebook page.

“Pleasure mine”, the government official wrote while his fans wished him well on his page.