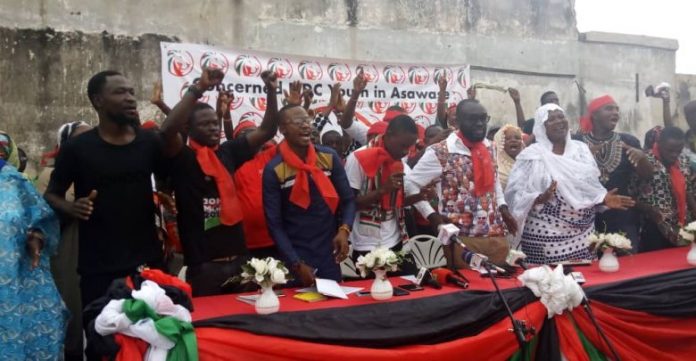 Some aggrieved NDC youth in the Asawasi Constituency have called on the leadership of the party to call their regional executives to order or pay for it dearly in the 2020 general elections.

The group who largely delegates in the constituency are accusing top party executives in the Ashanti Region of attempting to impose the incumbent MP on them.

The youth say they are not under any obligation to nominate Minority Chief Whip, Mohammed Muntaka Mubarak, as the race for the party’s parliamentary primaries heats up.

The group calling itself Concerned NDC Youth in Asawase says chaos will erupt in the party if national executives do not intervene.

Convener of the group, Fatiu Salihu, said at a press conference Tuesday that they had to fall on the police for protection to be able to pick nomination forms for an aspirant, Masawudu Mubarak.

According to them, party leaders frustrated all attempts to pick a form to contest the incumbent MP adding, they had to visit the party’s regional office twice before they secured forms.

“We knew there could be this kind of intimidation at this constituency level so we planned that if it happens we have to go to seek a redress at the regional level.

He wants party leaders at the national level to find solutions to the problem to protect the NDC’s image before the general elections in 2020.

Mr Salihu said such disagreements at the regional level could be blamed for the mayhem that occurred at the Ashanti regional office leading to the death of one person.

“Wherever there is disunity anything is capable of happening so the leaders should step in and avert further chaos,” he pleaded.

The NDC earlier this week opened nominations across the country to make way for individuals to contest in the upcoming parliamentary primaries.

Winners will represent the party in the upcoming parliamentary elections in 2020.

Calls on Bawumia to speak on economy sign of confidence in...