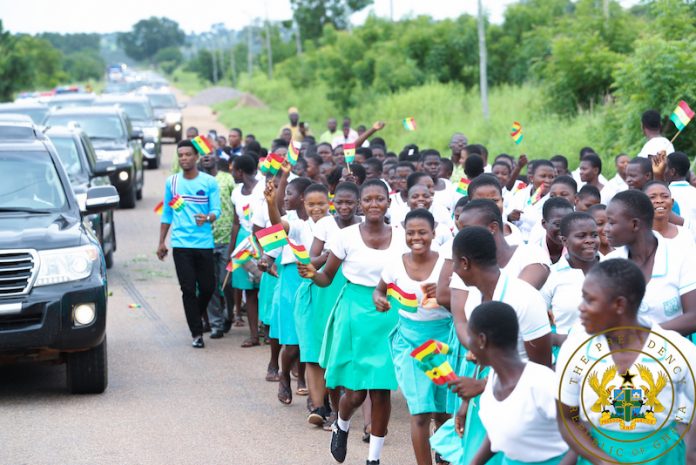 The New Patriotic Party (NPP) has said the opposition National Democratic Congress (NDC) is throwing dust into the eyes of Ghanaians by promising to abolish the ‘Double Track’ system in less than a year if it comes to power.

Mahama at a durbar of chiefs and farmers at Fawohoyeden in the Asunafo North district of the Ahafo Region last week, promised that within one year in office, he will eliminate the ‘Double Track’ system introduced by the government to ensure the smooth operation of the Free SHS Programme.

However, speaking at a press conference in Accra on Monday, October 12, 2020, the Director of Communications of the NPP, Mr. Yaw Buabeng Asamoa said the largest opposition party is only deceiving Ghanaians to win votes during the 2020 elections.

“Any promises by the clueless NDC leadership to abolish Double Track in seven months is unrealistic, shameless and desperate,” Mr. Asamoa said.

He added: “It is obvious that the NDC does not understand the Double Track system, and have no real commitment to Free SHS. They still cannot answer the question their pipedreams about education reform pose’s, ‘whose child stays at home’, whilst they fiddle around pretending to cancel double track?”

According to him, the Free SHS through the ‘Double Track’ system has increased enrolment at second cycle institutions, adding the government is poised to invest more into education.

“Today, our SHS population stands around 1.2 million learners, up from 800,000 at the start of the 2016/17 academic year. That is a massive jump. The nation should be proud of our mutual commitment to the success of getting so many of our children into senior high school who would otherwise be wallowing in despair at home, not because they do not qualify to enter SHS, but simply because through no fault of theirs, their families are too poor to see them through senior high school.”

Mr. Asamoa described the NPP’s flagship Free SHS programme as “destiny changing” because it is the “greatest and the most far-reaching intervention of the President Akufo-Addo administration.”

He said: “Available data between 2013 and 2016 indicate that, on the average, 100,000 children, every year, passed the Basic Education Certificate Examination (BECE) but could not take up their places in SHS, because they could not afford the fees, even though they had the qualifications. This represented about 35% of the total number of children who had been placed.

“Of those who took up their places, 22% dropped out, again due to financial reasons.

“Free SHS has therefore come as a major boost to parents, students and the nation. The important pillars of the Free SHS programme are Access, Quality and Relevance.”

“To cater for increase in enrolment in the second year of the FSHS due to the surge of candidates who had been home due to lack of funds, and who sought to benefit from the programme, the Double Track System was introduced in 2018 as an innovative intervention to make room for all successful candidates, with a clear timeline of 5-7 years to phase it out as more infrastructure was built in the 400 or so schools that went on double track, out of the total of about 721 SHS in this country. Over the last three years, more than 1,000 structures, including dormitories, classroom blocks and laboratories are being delivered in SHSs across the country,” Mr. Asamoa, who doubles as the MP for Adenta Constituency, stated.