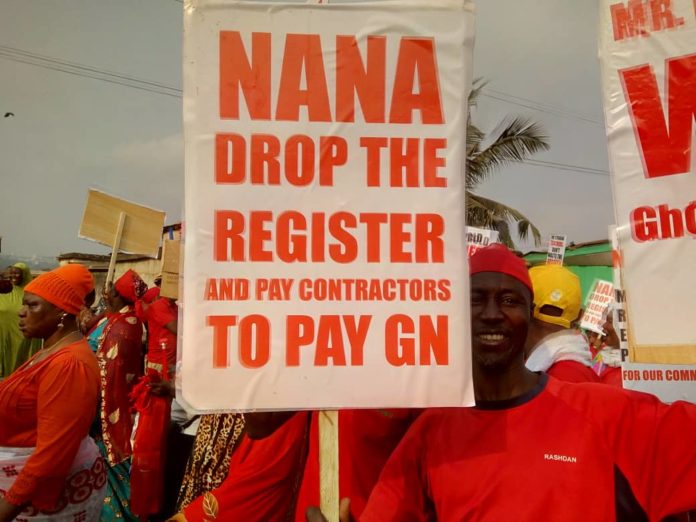 Ghana’s opposition parties have suspended a series of demonstrations across the country, organizers of the Inter-Party Resistance Against the New Voters Register (IPRAN) announced Tuesday.

The parties have also issued a one week ultimatum to the Eminent Advisory Committee to get the country’s Electoral Commission to back down on its decision to compile a new biometric register or face their wrath.

The chairman of the National Democratic Congress (NDC), Samuel Ofosu Ampofo disclosed this when he addressed some Ghanaians who joined the Inter-Party Resistance Against the New Voters Register’s demonstration in Kumasi in the Ashanti Region on Tuesday.

Clad in red and black attire, hundreds of Ghanaians poured out on the streets of Kumasi to protest against the Jean Mensa-led Electoral Commission, as it rolls out processes to compile a new biometric register.

The protest ended peacefully with organizers commending the police for exhibiting professionalism.

Mr Ampofo said the group suspended its actions out of respect for the Eminent Committee which earlier called for calm.

“We only have 10 months to the election. This is not the time to change the register. We’ve appealed to elders and the eminent group. Jean Mensa is not prepared to engage political parties on the IPAC platform. We want her [Jean Mensa] to listen to the voice of reason and let us dialogue and see how to ensure that the country develops”, he said.

He further added, “Due to the respect we have for our Eminent elders, the NDC and the other parties that form the coalition and CSOs, we will suspend our demonstrations and wait on the Eminent personalities, to see whether the EC will listen to them and allow us to meet to dialogue on this matter”.

With Accra being the last venue, the event was aimed at putting pressure on the Electoral Commission to abort its decision to compile a new voters’ register ahead of the 2020 general elections.

Security was tight on the ground to protect life and property.

Compilation of new register to start by April —EC

Meanwhile, the EC says it will begin compiling the new voters register for the December 2020 elections in April.

The commission added it hopes to end the exercise by the end of May.

The Director of Electoral Services, Dr Serebour Quaicoe made this known in a radio interview with Accra-based Starr FM on Monday [January 20, 2020].

“We want to start by mid-April and by the end of May we would have finished,” he said.