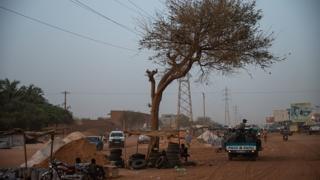 At least 20 people have been killed in attacks by gunmen on several villages in Niger, local authorities say.

Tidjani Ibrahim Katiella, governor of Tillaberi region, said the assailants were riding motorbikes during the incidents on Saturday.

Since 2017 a state of emergency has been in place in Tillaberi, which borders Mali, Burkina Faso and Benin.

Niger, Mali and Burkina Faso are all struggling to cope with a jihadist insurgency, with numerous different militant groups moving between the three countries.

Three UN peacekeepers were killed and four wounded in an attack in northern Mali’s Kidal region on Sunday.

Eyewitnesses told local media that the latest attacks in Niger took place at about 16:00 local time (15:00 GMT), with gunmen targeting villages including Gadabo and Koira Teguio.

What happened in Mali?
The UN has a 13,000-strong peacekeeping force in Mali, which has been targeted by insurgent groups.

On Sunday, three Chadian peacekeepers were killed when their convoy hit a roadside bomb. No group has claimed responsibility for the deaths, but such explosives are a preferred tactic of jihadis in the area.

The head of the UN peacekeeping mission in the country, Mahamat Saleh Annadif, said those responsible for what he called a “cowardly terrorist act” must be apprehended and put on trial.

Militants affiliated to the Islamic State and al-Qaeda continue to operate in the region, weakening control by national governments. Attacks by these groups have killed 170 government soldiers since December last year.

Last week the UN Secretary General, Antonio Guterres, warned that jihadist groups in the Sahel were exploiting the coronavirus pandemic to step up attacks.

Combatting militants in the region is seen as important for maintaining security further afield, including Europe. Several African and European countries, along with the US, have set up a military task force to deal with the insurgency.

North East: Your leadership is sterling – Overlord to Akufo-Addo