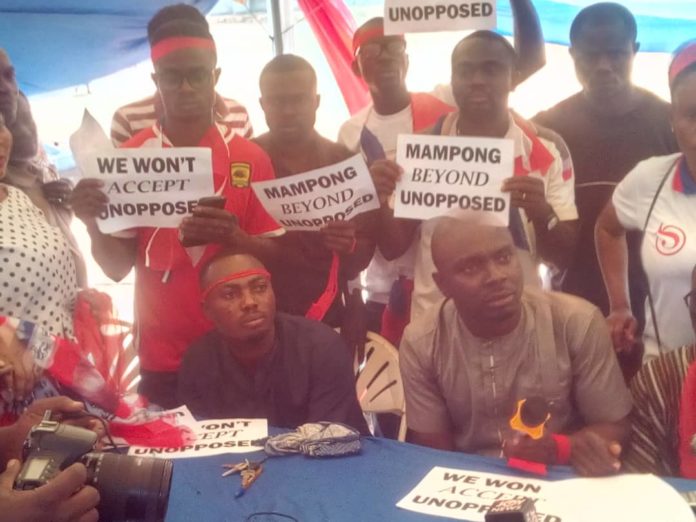 Some delegates of the ruling New Patriotic Party in the Mampong Constituency have threatened a legal action ahead of the party’s parliamentary primaries slated for April this year.

The aggrieved party members have accused the incumbent MP, Kwaku Ampratwum-Sarpong of conniving with certain leadership in the party hierarchy to shield him from being contested.

Party youth also say they intend to inject better energy capabilities to gain a competitive edge in the light for more support base ahead of the 2020 general elections and that, the incumbent Member of Parliament is not fit for that discourse.

The delegates say they would take a decision once thorough analysis and assessment have been done on why Benjamin Arthur and Francis Addae Nimoh are being denied a chance to contest.

“We will make a decision on this once we have thoroughly analysed and assessed the grounds for prohibition from a legal standpoint. According to the acts of the party as well as the rules and regulations governing the primaries of our party this year,” the leader of the ‘concerned delegates’, Mr. Solomon Nyantakyi said.

The group also questioned how incumbent Member of Parliament, Ampratwum-Sarpong won the party’s last primaries and accused him of not doing much for the people.

There are growing concerns over the party’s decision to protect some sitting MPs in the Ashanti Region.

Prospective aspirants in these constituencies are yet to purchase nomination forms as the closing date nears.

One of the aspirants, John Darko who is seeking to unseat Majority Leader, Osei Kyei Mensah Bonsu in the Suame constituency has expressed frustration over his inability to pick up nomination forms to contest in the party’s primaries.

A section of the party has also kicked against a directive by the party to allow women MPs to contest unopposed.

The NPP will hold its Presidential primaries on April 25, 2020.

The party will also be electing the remaining Parliamentary candidates on the same day.

Letter from Africa: Ghanaians leave nothing to chance for the New...