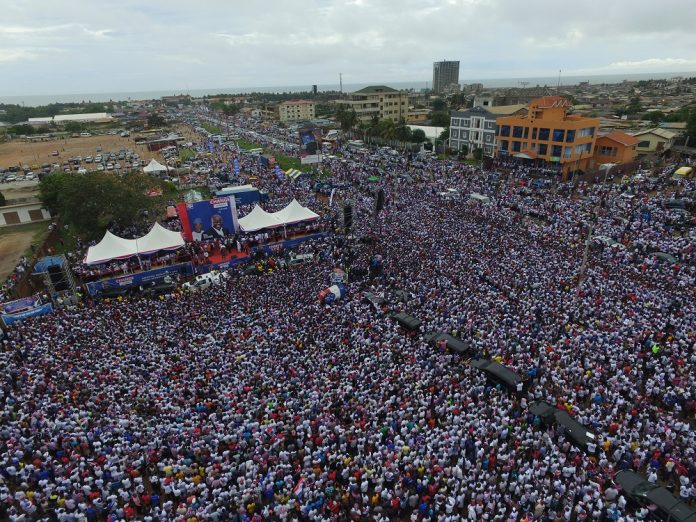 The New Patriotic Party (NPP) is set to conduct parliamentary primaries in 104 constituencies on Saturday, September 28, 2019, as part of preparations for the 2020 general elections.

Termed “orphan constituencies”, these are areas where the party lost the 2016 Parliamentary Elections to the opposition National Democratic Congress (NDC) and therefore has no sitting Members of Parliament on the party’s side in Parliament. The NPP has I69 seats out of the total 275 seats in Parliament.

Saturday’s constituency delegates conference which would be taking place simultaneously in all 104 constituencies are therefore part of the steps the NPP is taking to win some of those seats in the 2020 general elections.

The party will at a later date organise parliamentary primaries in the 169 constituencies where it already has sitting MPs.

In all there are a total of 106 “orphan constituencies” for the NPP but for now, the primaries in two of such constituencies, Chereponi and Hohoe have been put on hold, Graphic Online has gathered.

Chereponi is on hold because of some grievances in relation to tribal issues whilst Hohoe, where the Minister of Energy, Mr John Peter Amewu is the sole contender has also been put on hold, according to the Director of Elections and Research at the NPP, Mr Evans Nimako.

A total of 283 aspirants have since been given the green light to contest in Saturday’s Parliamentary primaries happening across the country.

In all, a total of 292 aspirants picked forms for the contest but nine of them were disqualified during the vetting process, Graphic Online understands.

Out of the 104 constituencies, there are 16 of them where the aspirants would be contesting as unopposed candidates and therefore delegates would decide on their fate through popular acclamation, Graphic Online understands.

The keenly contested elections will, therefore, take place in 92 constituencies.

The Minister of Energy, Mr John Peter Amewu is also the sole candidate for Hohoe.

Aspirants procured nomination forms at a non-refundable fee of GH¢20,000 through a bankers draft.

In order not to leave anyone behind and to encourage more women, youth and physically challenged persons, the party pegged their fee at GH¢10,000.

Some of the competitive areas are Karaga where the Deputy Minister of Energy, Mohammed Amin Adam is contesting with two other candidates.

At Klottey Korle in Greater Accra, two aspirants, Henry Harold Quartey and Prince Appiah Debrah are competing for the slot.

At Bodi constituency where the opposition NDC has been winning with big margins, the NPP is hoping to depose the sitting Member of Parliament, Sampson Ahi with either of the two aspirants Amoah Mensah Kennedy and Ignatius Akwasi Amankwa

The Savannah region has six, Upper East and Upper West has six each. All 18 constituencies in the Volta are orphan for the NPP whilst the Western Region has four.