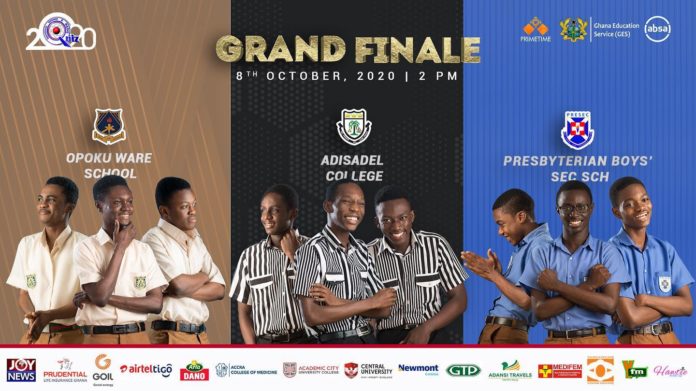 So it’s all set: the 2020 National Science and Maths Quiz final, to be contested on October 8 by Opoku Ware School (OWASS), Adisadel College (ADISCO), and Presbyterian Boys’ Secondary School (PRESEC).

Between them are eight championship titles, as well as recent history: the three schools battled each other in one of last year’s semi-finals. This time, though, the stakes are much higher, and Ghana awaits the coronation of a worthy champion to climax what has been another remarkable exhibition of academic brilliance.

Opoku Ware are, if you like, the Juventus of the NSMQ: so often finalists, so rarely winners. They haven’t won the competition since 2002, when the brilliant Paul Azunre inspired a victorious campaign. In PRESEC, they face familiar, unyielding foes; thrice have OWASS been up against the Legon-based ‘Blues’ in the final, never once triumphing. PRESEC beat OWASS for their very first title, in fact, back in 1995, and wouldn’t mind doing same in securing a record-extending sixth. OWASS, though, would have to contend with another force, Cape Coast’s ADISCO, to whom they lost in 2016. Huge as the odds may be, however, OWASS would be confident of bagging a title that could take them within touching distance of archrivals and four-star kings Prempeh College.

The Santaclausians are carving a reputation for themselves as latter-day giants of the NSMQ, having been rather late to the party. ADISCO didn’t reach a final until 2015, but they’ve since made up for lost time, going on to feature in three of the next/last four finals. The success rate hasn’t been very high, though, with ADISCO winning the title just once (2016). Tuesday’s semi-final performance may not have been great — winning with only 21 points, just ahead of runner-up Achimota School — but their route to the final has been unarguably tougher, being the only school among the three finalists to face previous champions (St. Peter’s SHS, quarter-finals; Achimota School, semi-finals). They overcame, though, maintaining a record of at least one school from the Central Region competing in the finals since 2013; now, for their own pride, they’d want to go one better.

If the NSMQ’s history could be split into two halves, PRESEC’s brilliance — and the resulting dominance — would define the first era (1993-2009). Five times they won it — including the distinction of being back-to-back champions (2008, 2009), and four of the last seven crowns before the competition’s two-year hiatus — to cement their place as supreme NSMQ royalty. Since the competition’s new format began (2012-present), however, PRESEC have experienced drought. Now, though, they’ve reached consecutive finals, and while their path thus far has been clear of any former champions/finalists, they face two in Opoku Ware and Adisadel. Those are formidable forces, also boasting rich pedigree, but there is reason to believe that PRESEC may just have rediscovered the blueprint for putting daylight between themselves and the chasing pack.

*Rounded off to the nearest whole number.

Akufo-Addo cuts sod For ‘Forward Operating Base’ to protect Oil &...