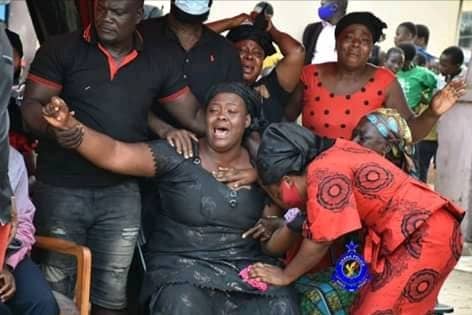 The Inspector-General of Police (IGP), James Oppong-Boanuh, has condoled with the families of the two police officers who drowned in a river at Kobro near Obuasi in the Ashanti Region.

The two Corporals – Stephen Kyeremeh and Amedius Akwasi Boateng – died, while returning from a robbery scene when a canoe carrying a four-member team capsized on the Oda River which burst its banks on July 15.

Their bodies were recovered after local divers joined a team of Regional Crime Scene Officers after close to 72 hours of search.

Footages shared on the Ghana Police Service’s Facebook page show residents are yet to recover from the tragic death of the officers as they wailed uncontrollably upon the arrival of a delegation led by the IGP who had visited the Obuasi community on Monday.

“Why me! Why me!” a family member screamed as she drew close to the IGP in tears. “I’ve lost my son”, another teary-eyed family member sobbed while other police officers consoled their colleagues.

The IGP’s visit was to hear for himself accounts of how, where, and why the officers were drowned, the Ghana Police Service said in a statement.

While consoling the grieving family, he reminded officers of the service to remain professional on the discharge of their duties and assuring them of his timely support.

“We came to commiserate with the family,” Mr. Oppong-Boanuh said adding: “We have also interacted with the surviving officers and urged all our officers not to be obstructed by this disturbing news.”

“I am happy with the massive support by the two Chief Executives of Obuasi East District and Obuasi Municipal Assemblies to reducing crime in this jurisdiction,” the IGP said in Twi as he promised a befitting burial for the departed officers.