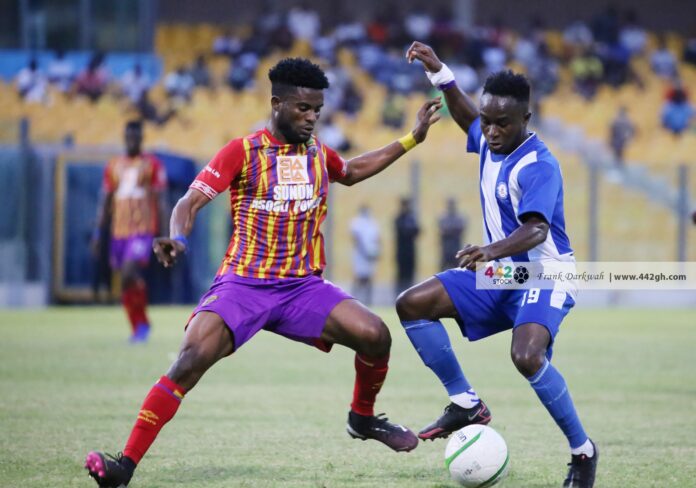 Hearts of Oak dropped precious points in their quest to win the 2020-21 Ghana Premier League title after playing to a 1-1 draw against rivals Great Olympics in Sunday night’s entertaining Ga Mantse Derby.

The Blue and Whites were the quickest to come out of their shells but gradually became a pail shadow of themselves after the opening ten minutes of the match.

The Rainbow Boys came into the match stronger after the first ten minutes and were beginning to drive their screws on Olympics and then a controversial decision.

Striker Isaac Mensah’s long range shot hit the under of the cross bar and landed over the goal line but the referee Rustum Gameli could not capture it.

Just after the half hour mark, Mensah profited from a poor clearance by the Olympics defenders inside the box but his toe-poked effort rolled feebly into the hands goalkeeper Asare

Six minutes in the second half, Hearts of Oak shot themselves into the lead with a superlative long range finish from Nettey.

Goalkeeper Asare came out to punch Salifu Ibrahim’s corner kick but the ball went straight to the midfielder who smashed in on a half volley which zoomed powerfully into the roof.

Eighteen minutes to the end of the match Abbey Quaye made amends with a close range headedggoal following a cross from right back Kwabena Boateng after Raddy Ovouka had given the ball away in his own half.

The game ended in a 1-1 stalemate as the Phobians return to the summit after the game but level on points with rivals Kumasi Asante Kotoko SC after 28 matches.

Exclusive: Black Stars striker Ekuban out for a month