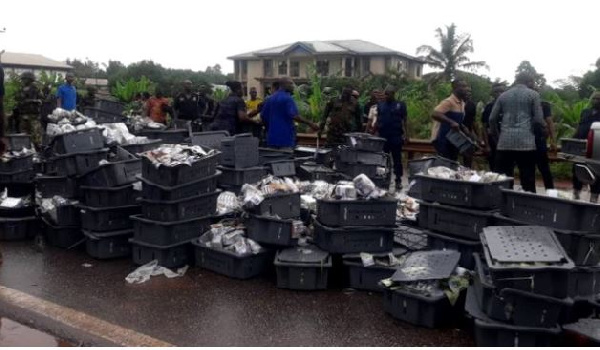 A motor accident involving a Bank of Ghana bullion van and a fuel tanker on the Kumasi-Techiman highway has claimed at least one life, media reports say.

The deceased has been named as Osman Zongo, the driver of the fuel tanker.

The victims of the crash have been airlifted from the Techiman Holy Family hospital to the Komfo Anokye Teaching Hospital, Kumasi, Accra-based Joy FM reported.

The fuel tanker had begun its journey from Tema and was expected to offload in neighbouring Burkina Faso.

A combined team of the military, Police, Fire Service, Immigration and the Bureau of National Investigation (BNI) cordoned off the accident scene and collected the scattered money into various security vehicles.

Others were seen feverishly directing traffic as motorists who appeared stunned by the development looked on.

It is gathered that the cash collected from the scene of the crash will be kept at the Police Divisional Headquarters cells under the guard of the Military, Police and Bank of Ghana security officers.

Meanwhile, officials from the Central Bank and the police are yet to give an official statement on the matter.

There are fears however that the death toll could rise.