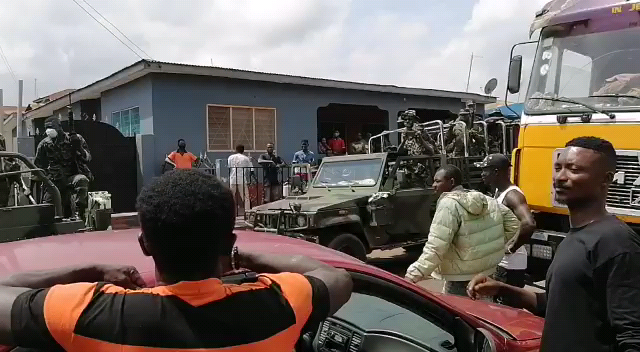 Tensions are high at Patrensa, near the Asante Akyem Municipal town of Konongo in the Ashanti Region, after a renewed clash between armed soldiers and some suspected illegal miners left at least six persons injured.

Multiple reports indicate that the miners were protesting against the death of one of their colleagues who sustained gunshot wounds following a clash between the military and some illegal miners on Wednesday.

Initial reports indicate that the armed personnel were deployed following a distress call by the Owere Mines after some illegal miners invaded their concession in search of gold at about 11:30am on that fateful day.

The soldiers and the mining firm’s security detail who chased out the illegal miners in an operation, were reportedly attacked on their return as the unlicensed miners blocked the Agogo/Patrensa motor road burning tyres amid firing of gunshots.

The officers who sensed danger also returned fire which eventually hit one of the irate youth killing him instantly.

The deceased in his mid-30s was picked by the military to the First Klass Hospital morgue for preservation and autopsy.

The youth who became incensed about the development staged another protest on Thursday and had thronged the Konongo Traditional Council to petition the chief of the area.

“This morning as early as 5:00am, we had information that the small scale miners intend to converge over the death of their colleague. They proceeded to Patrensa and there was another confrontation between them and the mining security and the military on another side,” Divisional Commander Chief Superintendent Shaibu Osei told the media in an interview.

“Two military personnel who were guarding a generator were also attacked destroying their vehicles in the process… We also heard the small scale miners had also converged here and so we moved to talk and assure them that investigations had commence…but before we had finished with them we heard the military firing at the crowd,” the police chief who was caught up in the ugly scene further narrated.

The Thursday morning incident has forced top security chiefs in the Asante Akyem Police Division into an emergency meeting while investigations continue.

Meanwhile, the injured persons have been rushed to the Konongo-Odumase Hospital.

The officers were deployed to stop the illegal miners from trespassing on a concession belonging to the private mining firm which had stopped operations for sometime now.

In 2017, two illegal miners died after a mining pit collapsed on about 14 miners in that same area.

I ‘lied’ about missing Takoradi girls to give hope to family...