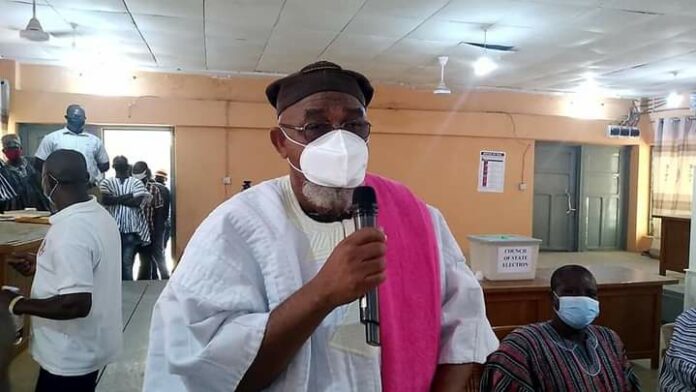 The Electoral Commission has declared the Paramount Chief of the Talensi traditional area, Tong-Raan Kugbilsong Nalebegtang as the Council of State member representative for the Upper East Region.

After Friday’s polls the traditional leader polled 19 votes out of 30 valid votes cast to beat his main contender, the paramount chief of the Chiana traditional area and President of the Upper East Regional House of Chiefs, Ditundini Adial Thomas-More.

The other two; a teacher and presiding member for the Kassena-Nankana West Assembly, Mr. Akurugu Eric Aligiyalah and a former NPP Regional Organizer, Mr. Yaw Mort had no vote.

In his acceptance speech, Tong-Raan Kugbilsong Nanlebegtang called for the support of all and sundry to enable him to lobby and bring the needed development to the Upper East Region.

He will be joining the 11 appointees already named by President Akufo-Addo.

The President earlier, subject to consultation with Parliament, appointed, in accordance with Article 89(2)(a)(i)(ii) and (iii), Georgina Theodora Wood, a former Chief Justice, Lt. Gen. J.B. Danquah, a former Chief of Defence Staff of the Armed Forces, and Nana Owusu Nsiah, a former Inspector General of Police, to the Council.

The President of the National House of Chiefs, Ogyeahohoo Yaw Gyebi II, is an ex-officio member of the Council, in furtherance of Article 89(2)(b).

The Council of State is to among other things counsel the President in the performance of his functions.

COVID: Ghana to start Pfizer vaccination for students above 15