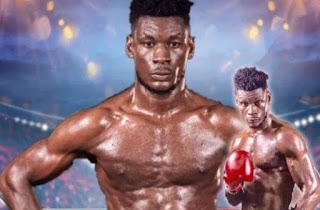 Ghanaian Boxer Patrick Allotey has been handed a six-month ban after he was found guilty of misconduct and bringing the sport into disrepute.

He was sanctioned by the Ghana Boxing Authority on charges of misconduct in relation to a viral video that was taken at the Accra Sports Stadium.

At a recent Ghana Premier League game between Hearts and Kotoko, the boxer was seen assaulting a football fan who has been identified as Micheal Siaw.

The Association says it found Allotey guilty on his own plea and his suspension takes effect from February 6.

The country’s boxing governing body also says it will notify the global sanctioning bodies about this development.

Allotey’s rise to relevance started in 2018 when he won the WBO Africa super Bantamweight title against compatriot Frank Dodzi.

He went ahead to defend it twice against Uganda’s Badru Lusambaya and Sherif Kasongo of Democratic Republic of Congo.

Read the GBA’s full statement below: