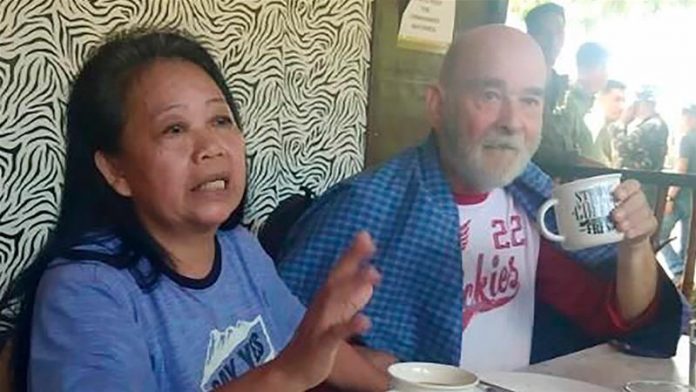 Philippine troops on Monday rescued a British man and his Filipino wife who were abducted from a southern beach resort last month by gunmen linked to the Islamic State of Iraq and the Levant (ISIL or ISIS) and taken to their jungle hideouts.

Regional military commander Lt Gen Cirilito Sobejana said troops caught up with the Abu Sayyaf captors of Allan Hyrons and his wife, Wilma, in the mountainous hinterlands of Parang town in Sulu province and rescued the couple after a fight.

“There was a running gun battle,” Sobejana said. “They left the two behind because they could not drag them any more. They scampered in different directions but our troops are in pursuit.”

The Hyrons were not hurt in the 10-minute exchange of fire, the military said, adding that no ransom had been paid to the group.

Philippines vows to ‘crush’ attackers after deadly church bombing (2:56)
A picture released by the military showed the couple smiling in a military camp and talking with generals and other army officers in Sulu.

Sobejana said the couple will undergo a medical checkup and be interviewed by military officials.

Gunmen abducted the couple last month as some villagers watched in shock from their beach resort in southern Zamboanga del Norte province, sparking a massive search.

The couple also owned a college in Zamboanga del Norte’s Tukuran town, where they had lived for many years.

Military successes
Military offensives against ransom-seeking groups such as the Abu Sayyaf have reduced abductions in recent years.

Sobejana confirmed that three Indonesian fishermen abducted recently off Malaysia’s Sabah state near the sea border with the southern Philippines were in the hands of Abu Sayyaf fighters in Sulu.

The Philippine government has promised to crush the Abu Sayyaf Group.
Abu Sayyaf gunmen have staged kidnappings in and off Sabah in the past, sparking a regional security alarm.

The rescue of the Hyrons came after the military inflicted successive defeats on the Abu Sayyaf, which is listed as a “terrorist” organisation by the United States and the Philippines.

On Friday, they killed a “high-value” but little-known Abu Sayyaf commander, Talha Jumsah who was said to have acted as a key link between ISIL and local fighters.

On Sunday, troops killed five fighters, including two commanders, one of whom had been blamed for past ransom kidnappings.

The Abu Sayyaf emerged in the late 1980s as an offshoot of the decades-long Muslim separatist armed uprising in the south of the largely Roman Catholic nation.

After losing its commanders early in battle the Abu Sayyaf rapidly degenerated into a small but brutal group blamed for ransom kidnappings, beheadings and other acts of banditry.

Most of its factions have pledged allegiance to ISIL.