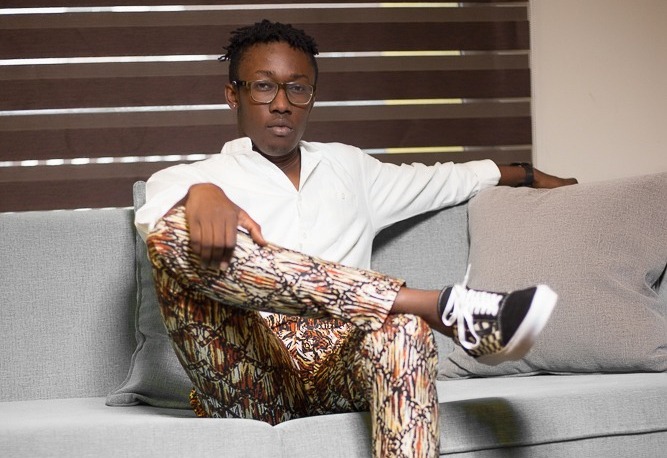 New Afro Dancehall/Reggae kid on the block in Ghana, Phronesis, must be an emotionally strong person, to have survived the rejections many aspiring musicians usually go through in their bid to pursue a career in music.

Born David Nana Ampoful, the maker of ‘The Street We Dey’ told The New Publisher Entertainment hisjourney to recognition, from the level of an underground artiste, was a rough one only few upcoming musicians would love to thread.

He says “It pays to be focused, determined and resolute”. However, he is still worried about the cost of production in the Industry, which he says is killing young talents, especially kids like him, who are just making it to the top.

”In foreign countries, TV and radio stations pay artistes for using their works but it is sad the situation is the opposite here. You need to have a lot of money before your song becomes a hit”.

As a way out of the current unhealthy friction, Phronesis called for unity, and more importantly, greater collaborative efforts, as a means of creating stronger bonds among young talents.

”There is this perception that when two artistes work together, it creates unnecessary competition, but that mindset should not be tolerated. The seniors in the game, with over a decade experience, should collaborate with the younger ones to help build strong relationship.

”For instance, the time spent in the studios to record a song creates a good chance to appreciate your colleague and also build friendship. With such a foundation, it will be difficult to harbour hatred or dislike because you know them better and accept their styles,” he indicated.

He added: ”This is what the Industry has developed into, so we can’t do without it but then again, publicity strategy should not hinder collective efforts for a vibrant industry. It should be handled to push for quality rather than quantity, which has become the trend now”.

According to Phronesis, the desire to be popular at all cost has pushed many talented young artistes to focus on producing what he called ‘disposables songs’. He is also worried that the industry appears not to be too receptive to new styles; a development he stresses is forcing many young artistes to follow what they consider to be ‘popular trends’.

”Our music always sounds the same because every artiste wants to become popular by making the kind of music people are familiar with. So with this knowledge, young artistes who have different and unique styles abandon them to toe the line of what already exists. Unfortunately, this has been the bane of the music industry.

”And that is why I think hits should not be the benchmark of a good artiste, because sincerely speaking, it doesn’t really take much to get your songs accepted in our part of the world. If you have the means to pay, then you are assured of a hit because your music will be all over the airwaves. How can we develop an industry with such a mindset?” he queried.

In-spite of his reservations, the artist, who is signed to Premier Space Entertainment, a multifaceted entertainment outﬁt in Ghana, said his latest song, ‘Street We Dey’, could be his breakthrough to stardom. He says he is hopeful of sailing through, with the help of his management team.

Reggae and Afro versions of the song, produced by beatz dakay and streetbeatz respectively, both tackle the real hardship people are facing on the streets of Accra and other areas.

The Computer Science student at the Kwame Nkrumah University of Science and Technology (KNUST) showed his passion for music at a tender age of twelve. With a desire to lighten up moods and heal wrenched hearts through music, Phronesis is destined for success on the global market.

He cites Popcaan, Mugeez and Stonebwoy as some of his musical icons.

Wizkid snubs Tiwa Savage after he noted she has learned not...

Convert GBC into a zoo for tourist attraction – A Plus