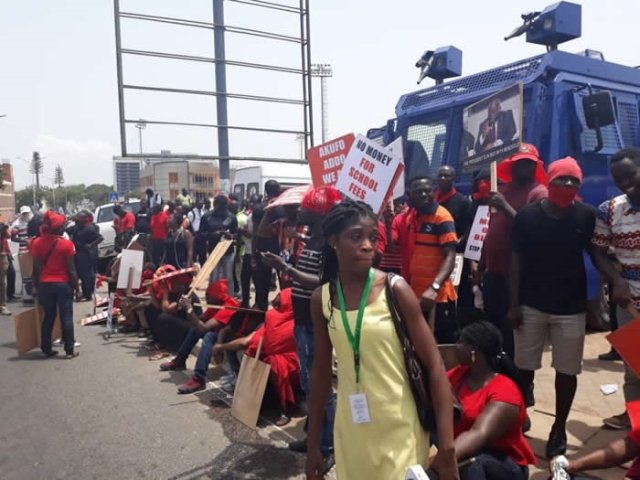 Scores of Menzgold customers have been arrested on Wednesday for protesting at the residence of the beleaguered CEO Nana Appiah Mensah.

They were arrested for trespassing, illegal entry and causing harm to security operatives.

The Greater Accra Regional Police Command said the arrest was to maintain law and order at the enclave.

Though police in the Greater Accra Region will not give any official figures it said the suspects will be screened for further action.

“On no occasion have this group of persons told the police that today, they will be embarking on a demonstration. There was no information to the police and we know we live in a democratic country,” Director of Operations, ACP Kwasi Fori, told reporters at the scene

He added: “The law asks any citizen to inform the police of any intention to demonstrate or mass activity. Looking at this very environment, and for this group of persons to invade the premises, assaulting the security detail of the estate and having forcefully entered the place to carry out such an illegal exercise, has something to do with the police. Violation of the law calls for arrest. So they have been arrested and are being taken to the Regional Police headquarters for investigations to commence.”

The aggrieved customers matched to the Trassaco estate Monday to demand answers from NAM 1, as the CEO is popularly called, over delayed payment of their locked up investments despite several assurances.

One of the customers told reporters that: “We have been deceived. I thought all the payment plans will bring this to a closure but I have realised we have been shortchanged. Many of us have not been paid and that’s why we are here”.

The customers reportedly overpowered a security detail stationed at the enclave in a near scuffle.