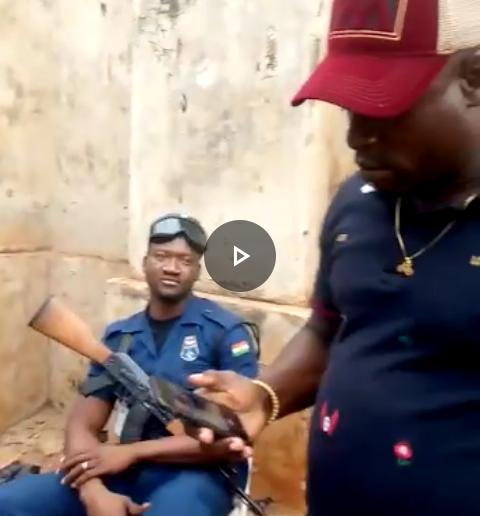 The Ghana Police Service said on Wednesday it is investigating a viral video of a man brandishing a gun at one of its personnel at a registration center in the Ashanti Region.

The incident, which occurred on Monday at Aboabo in the Asawase Constituency captures the man in a heated verbal exchange with the uniformed officer at the full glare of some military officers.

The man who claimed to be a National Security Operative is seen pouring invective on the officer as he pulled out a pistol, prompting the soldiers to calm nerves.

In a Facebook post, however, the Ghana Police Service said: “We are investigating a viral video on social media where a person in apparent civil dress brandishing an object which appears to be a pistol in the face of a police officer, with soldiers apparently calming tensions down.”

“All the uniformed persons in the video are known officers who are stationed in the Ashanti Region, where the incident took place”, the post continued.

The police officer has been identified as the bodyguard of opposition MP for Asawase, Muntaka Mubarak.

The National Democratic Congress lawmaker and Minority Chief Whip in Ghana’s Parliament is accusing the ruling party of being behind the chaos in the constituency.

“Sometimes you will just hear frivolous accusations about an agent or some other person and they just call them [security agencies] and they come and arrest them. Sometimes they arrest them [NDC people] without even knowing why they arrested the person.

“People should know that crime has no expiry date”, the Asawase MP said as he faulted the security agencies of failing to arrest New Patriotic Party members who fuel trouble at registration centers.

The registration exercise held by the Electoral Commission has been characterized by acts of violence, especially in the strongholds of the two main political parties.

Four persons were arrested and have since been granted bail. The MP who doubles as a cabinet minister has since been questioned by the police and the gun seized.