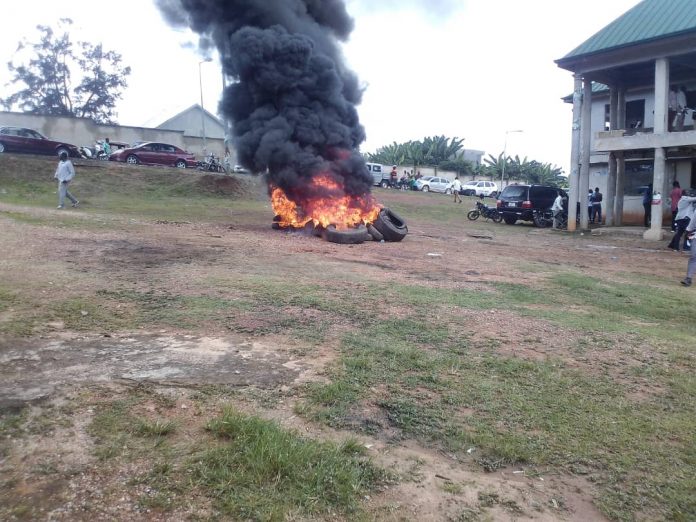 The disqualified aspirant for the Asawase primary of the National Democratic Congress (NDC), Mubarick Masawudu, has called on his rampaging supporters to calm down.

The supporters on Monday besieged the regional office of the party in the Ashanti region pelting stones at party executives and threaten to vandalise properties.

Heavily armed police officers have taken over the Ashanti Regional NDC party office to protect lives and property. A scheduled meeting between Regional and Constituency executives was nearly marred by the rioters as they burnt car tyres to register their protest.

Party regional executives including the regional chairman and some constituency executives have been held hostage as police prepare to whisk them away at the time of filing this report.

Masawudu in a statement said his attention had been drawn to reports of acts by some party supporters at the NDC Ashanti regional headquarters last Wednesday, following his announced disqualification from contesting the Asawase NDC parliamentary primary contest and the subsequent declaration of the incumbent Member of Parliament (MP), Mohammed Muntaka Mubarak, as contesting unopposed.

The statement said “while we condemn in no uncertain terms such occurrence, we wish to state that Mubarick Masawudu will not condone or sanction such action as his belief is well anchored in the democratic principles of rule of law, party discipline, fairness and objectivity.”

The position of his office was that the success of true democracy depended largely on the ability to operate openly and frankly in order to arrive at decisions that would be reflective of the will and desire of the people.