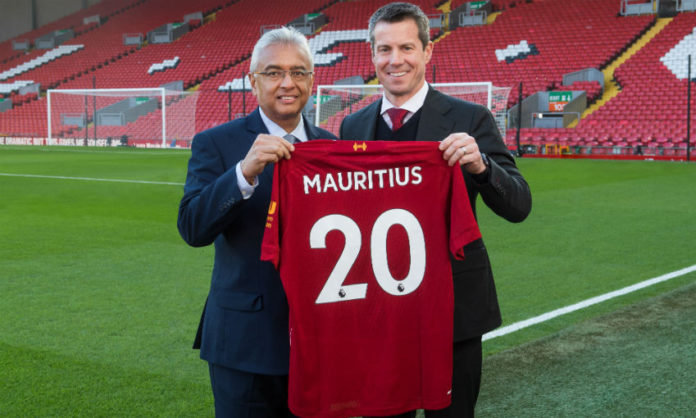 Off mainland Africa, and even beyond little Madagascar, Mauritius pokes out of the Indian Ocean.

Zoom out the map just a bit, in fact, and you might miss it. Mauritius isn’t known for much, and especially not in football, where their only Africa Cup of Nations appearance came in 1974; even on that occasion, they barely registered, lasting no longer than the first round.

On another — much, much bigger — island, though, Mauritius is breaking new ground, hoping to tap into the rich, bottomless sea of opportunities that the Premier League offers. The tiny nation now rubs shoulders with world champions Liverpool (crowned English champions, too, in a matter of days), after the Reds announced, on Monday, “a new global partnership with the Mauritius Tourism Promotion Authority and Economic Development Board Mauritius as the club’s official tourism and economic development partner.”

It came along with a nice photograph at Anfield, of Billy Hogan, Liverpool’s managing director and chief commercial officer, and Mauritian Prime Minister Pravind Kumar Jugnauth, holding up a Liverpool shirt numbered 20 (hint: it isn’t Adam Lallana’s name at the back). A footnote on the page indicated that the image had, in fact, been taken six months prior, before COVID-19 struck in full force and Liverpool were still cruising to a maiden Premier League title.

But even that was another six months after Liverpool had established and opened up one of their international academies in Mauritius, “to provide unique opportunities for children, around the country, from grassroots level through to elite youth football, to learn to play ‘The Liverpool Way’.”

‘The Liverpool Way’ is certainly attractive, as is the club itself, given its recent successes, which is why brands — as big as Nike, or as small as Mauritius — now seek to rub that big red lamp in anticipation of a genie springing out with bags of cash.

“We both share common values of dedication, determination and unity,” Honourable Jugnauth says. “This collaboration aims at strengthening and propelling Mauritius as a thriving economic powerhouse and a world-class tourism destination.”

It’s a path not many African nations have trodden, despite the continent’s heavy influence on the Premier League over the years. Rwanda took that chance in 2018, blowing £30 million on a sponsorship deal — also along the lines of tourism — with London-based Arsenal. It brought the east African country lots of negative publicity, as its economy doesn’t appear to have enough muscle to fund such a luxury, but it has also brought considerable returns — or so Rwandan officials argue.

“Critics say that this is not how we should invest our money,” tweeted Paul Kagame, Rwanda’s president and — possibly wholly coincidentally — a passionate Gunner. “In a very short time, I want to tell you that we have more or less made what we have spent more or less profitable, and that we expect much more.”

And Rwanda might just have the figures to back those claims, too.

“Before the partnership was signed, 71% of the millions of Arsenal fans worldwide did not consider Rwanda a tourist destination; at the end of the first year of the partnership, half of them considered Rwanda a destination to visit,” said Belise Kariza, head of the Rwanda Development Board’s tourism department, in September last year.

The overall value of the partnership (based on TV viewership and social media) is estimated at €36 million, according to statistics by Nielsen, Blinkfire Analytics, and research agency Hall and Partners. Inspired thus, perhaps, Rwanda has gone in big again, this time with French super-club Paris Saint-Germain.

Now, Mauritius may not be so eager to throw as much cash about, and it certainly won’t enjoy the visibility afforded Rwanda on Arsenal’s shirt sleeves, but there is plenty to be gained here. Mauritius, by nature and by geography, is already marked out as a dream holiday destination and finds itself on many bucket lists. Between June 2019 and February 2020, for instance, the country welcomed an average of about 112,000 tourists each month. Partnering Liverpool, then, would only strengthen Mauritius’ position as a tourist hot-spot and boost a flourishing industry.

Neither Mauritius nor Rwanda, interestingly, has ever been represented in Premier League history. And, while that isn’t likely to change anytime soon — don’t hold your breath — both countries would be content with what they’re getting out of these deals. But, really, that makes you wonder: just what are the African nations that already boast stronger Premier League presence — you know yourselves, don’t roll your eyes — waiting for?

‘It’s not right to force people to get COVID vaccines’: Group...