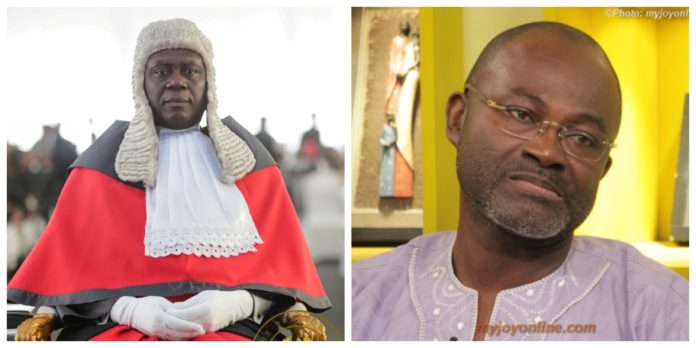 A group calling itself the Progressive Intellectuals has called on the judiciary to punish Assin Central MP Kennedy Agyapong for insulting a judge as it was done in the case of ‘Montie 3’.

According to the group, the apology from the lawmaker does not atone for his television attack on a judge.

The MP was seen in a video insulting the judge over a land case still before the court.

“You are a stupid judge. I willface you…I am not Anas to take bribe from you. I will deal with you,” he fumed on Net2 TV.

The MP is set to appear in court on Monday, September 14, 2020, after he was summoned over the attack.

In a statement, the Progressive Intellectuals said: “Ghanaians expect that the judiciary, in the same manner as was in the ‘Montie trio’, will crack the whip on Hon Kennedy Agyapong without fear or favour. We expect that the notorious trite maxim, “equality before the law” which underpins all democratic and lawful societies like Ghana shall be upheld”.

It stressed: “We deem the lawless conduct of the Hon MP as a grievous and a more impactful fault than that of the ‘Montie trio’s’ regrettable episode. It is therefore expected that the NPP MP is given a fair trial in the court and be allowed to have his day as well, and if found guilty given the appropriate punishment to serve as deterrence for like-minded persons”.

Below are details of the statement

IN THE MATTER OF THE CONTEMPT CHARGE AGAINST THE HON MEMBER OF PARLIAMENT FOR ASSIN CENTRAL, CENTRAL REGION, HONOURABLE KENNEDY AGYAPONG.

We write as a group known as Progressive Intellectuals, made up of academics with various backgrounds in Ghana, to bring our concerns to the attention of Ghanaians on the above subject matter.

We recall that in 2016, three individual Ghanaians were convicted on contempt charges for making some unguarded and unfortunate statements about the Honourable Chief Justice and some Justices of the Supreme Court on an evening radio discussion programme on Montie 100.1 FM. For emphasis, the three persons were convicted on their own guilty pleas on the following contemptuous charges against the Supreme Court; scandalising the court; defying and lowering the authority of the court; and bringing the authority of the court into disrepute. In a judgment of the Supreme Court of Ghana dated 27th July 2016, the contemnors, Salifu Maase (alias Mugabe) Godwin Ako Gunn and Alistair Tairo Nelson, citizens of Ghana, were convicted to prison for contempt of court.  Before judgment would be handed to them, the gentlemen in subsequent broadcasts on different platforms, expressed their remorse and rendered unqualified apologies for their statements. They admitted their guilt and apologised for their conduct, and pleaded for mercy and forgiveness before the court. It must be noted that, despite their personal apologies and pleas from sympathisers to the court to tamper justice with mercy, the Supreme Court was minded to exact judgment in accordance with article 126(2) of the Constitution of the Republic of Ghana to serve as deterrent to the general citizenry. The final judgment was sentence for each of them to four (4) months imprisonment, together with a fine of GHC10,000.00 each or in default a further term of one (1) month.

After paying the fines and serving parts of the prison terms at the Nsawam Medium Security prison, the convicts petitioned the President and received pardon through the lawful exercise of the prerogative of mercy under Article 72 of the 1992 Constitution, which pardon received mixed reactions from the general public.

It is instructive to note that, as expected of the moral society, before the “Montie trio” would be convicted, the general public including civil society organisations, faith-based organisations, professional bodies (notably the Ghana Bar Association (GBA), the Ghana Journalists Association (GJA)), political parties (including the party they were alleged to belong to, the NDC), and some respected individuals had through different fora condemned their conducts with all the alacrity it deserved.

In the last few days, Ghanaians woke up to hear a very serious and condemnable statement allegedly uttered by the Hon Member of Parliament for Assin Central in the Central Region, Hon Kennedy Agyapong, threatening to deal with a sitting judge in a case he is involved himself as a defendant. Kennedy Agyapong on his privately-owned media, Net 2 TV on Wednesday, September 2, 2020, used very unprintable language to express his displeasure in a land case he is appearing as a defendant and an interested party. His anger was over a decision by the trial judge to grant an injunction against him without allegedly conducting due diligence. In his furor, the MP alleged that judges in Ghana abuse their powers in line with their judicial roles and threatened to “face the judge” in this particular matter and dared same to challenge him.

We take note of the fact that, upon receiving a contempt summon from the court, the NPP MP has issued a personal statement ahead of the September 14, 2020 scheduled date for hearing to apologise to the Honourable Chief Justice and the Justices of the courts in Ghana as a whole.

We took note to rehash the brief backgrounds of the two cases to underline the principles that must inform the moral judgments of the general public and particularly the court trying this matter to take judicial notice of precedents and lessons for posterity.

In a democratic society like Ghana, the least one would expect is the misapplication of our laws and/or unfair treatments of citizens based on their race, place of origin, political opinion, colour, religion, creed or gender against the spirit of article 12(2) of the 1992 Constitution.

First, without prejudice to judicial processes, we are still astonished by the loud silence of the general public, and particularly by the GBA in condemning this contemptuous outburst. We will therefore demand same swift condemnation from the GBA, the GJA and like-minded organisations as they did in the “Montie trio” case.

We shall always as academics expect a greater level of condemnation for someone in the capacity such as lawmaker of our Republic who is naturally expected to live above reproach and defend the institutions of government which he has sworn on oath to do same.

Ghanaians expect that the judiciary, in the same manner as was in the ‘Montie trio’, will crack the whip on Hon Kennedy Agyapong without fear or favour. We expect that the notorious trite maxim, “equality before the law” which underpins all democratic and lawful societies like Ghana shall be upheld.

We deem the lawless conduct of the Hon MP as a grievous and a more impactful fault than that of the ‘Montie trio’s’ regrettable episode. It is therefore expected that the NPP MP is given a fair trial in the court and be allowed to have his day as well, and if found guilty given the appropriate punishment to serve as deterrence for like-minded persons.

We trust the highest impartiality of the Ghanaian judiciary and hope that no influence will come to bear in this matter in any way in the pursuit of justice and equity.  We are also by this statement calling on the President of the Republic of Ghana, His Excellency Nana Addo Dankwa Akuffo Addo to publicly condemn the conduct of his NPP MP and support a fair trial of same.

Long live the Judiciary of Ghana!