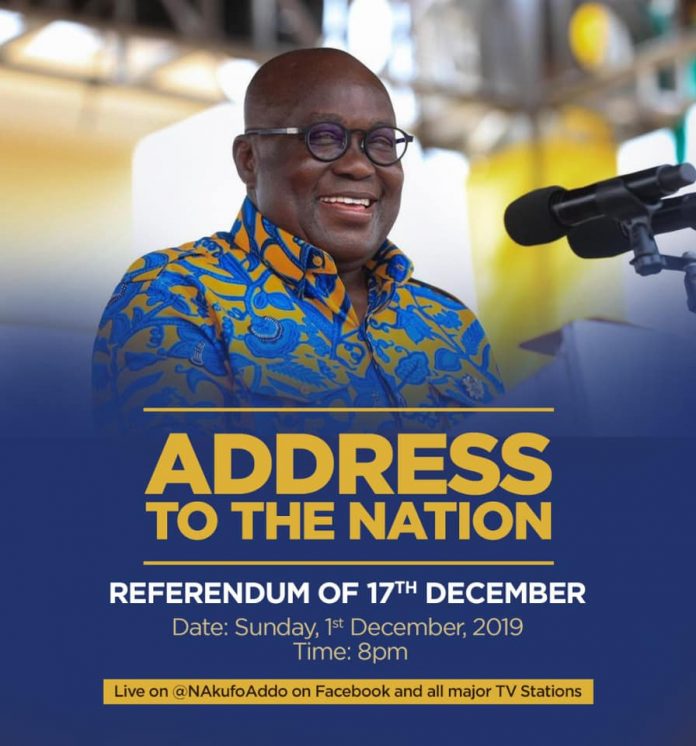 Ghanaian leader Nana Akufo-Addo will speak on the fate of the much-talked about December 17 referendum tonight in an address to the nation, DailyMailGH can confirm.

The nation is divided over the referendum which is aimed at allowing political parties to take part in local assembly polls.

Director of communication at the presidency, Eugene Arhin has confirmed tonight’s address to the nation via national television.

It will be recalled that last week, a Deputy Minister of Information, Pius Hadzide, indicated that before the President travelled outside the country, he commissioned another round of consultations on the process and he will make a decision on the matter after he receives a report on the consultations.

While the governing New Patriotic Party(NPP) and some Civil society organizations are campaigning for a ‘YES’ vote, the leading opposition party National Democratic Congress(NDC) and some members of the National House of chiefs are also campaigning for the opposite.

It is on the back of this that the Asantehene Otumfuo Osei Tutu II at a forum last Friday called for further consultations.

While speaking on the Big Issue on Saturday, Deputy Minister for Information Mr. Hadzide said: “This is a listening government. Before the president travelled out of the country, he gave instructions that another round of consultations be carried out to clear out the misconception that has been driven into the system to bring clarity to bear on this issue. There is a referendum slated for the 17th of December, [and] we are proceeding. When the President comes, he will be briefed about the outcome of the consultations and he will take a decision.”

Due to the division in opinions surrounding the December 17 referendum, the Minister for Regional Reorganization and Development, Dan Kwaku Botwe called for a broad consultation.

Also traditional leaders are also divided after the Chairman of the Governance Committee of the National House of Chiefs; Ogyeahoho Yaw Gyebi II disclosed that the posture of the House for a NO vote did not represent the concerted views of the chiefs.

The December 17 referendum is to decide on a possible amendment of Article 55 (3) of the 1992 Constitution to empower political parties to sponsor candidates for local level elections.

Exclusive: Ghana target Gakpo out of Netherlands-Cyprus qualifier due to malaria