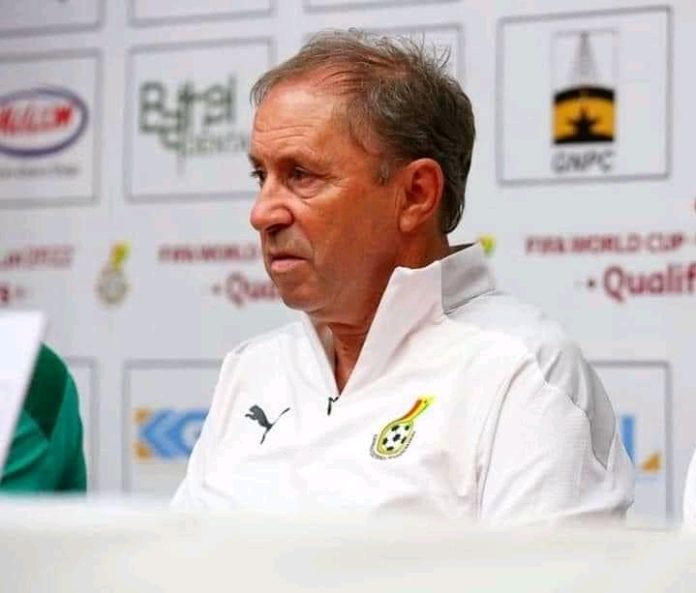 The government of Ghana has asked the Ghana Football Association to sack Black Stars coach Milovan Rajevac with immediate effect, Dailymailgh.com can confirm.

The Serbian coach has been on the job for less than five months on his contract after he was appointed the country’s coach for a second stint.

After a shambolic AFCON performance in Cameroon, Ghana Football Association has received a friendly advise by Ghana government through the ministry of Youth and Sports to see off the Serbian coach Milovan Rajevac after only five months in office.

Milovan Rajevac set an unwanted record with the Stars at the ongoing Africa Cup of Nations tournament in Cameroon as he failed to win a single game at the competition which is the first time ever in the history of the country’s football.

The 68-year-old was appointed as the successor to Charles Kwabena Akonnor who was sacked in September last year with the task of qualifying Ghana to 2022 FIFA World Cup which will be staged in Qatar and winning the 2021 Africa Cup of Nations.

Despite the target given him, things did not go as planned at the Africa Cup of Nations tournament as the Black Stars were kicked out of the group stage after Surprisingly succumbing to minnows Comoros in an all-important fixture at the competition.

Ghana’s defeat to the Islanders meant they had set a bad record at the tournament as they failed to beat lowly ranked teams like Gabon and Comoros, finishing bottom in the group with one point and without a win.

Due to the catastrophic performance exhibited at AFCON, an emergency meeting was held on Friday, January 21 in Accra between the top hierarchy of Ghana FA and representatives of government led by Ussif Mustapha, Minister of Youth and Sports.

The ministry stated emphatically ans categorically clear to the FA that Ghanaians have lost faith in the Serbian coach, therefore, his appointment must be reviewed as soon as possible.

At the emergency meeting held on Friday, January 21st, Ghana government, through the ministry of Youth and Sports, has advised Ghana Football Association to sack Milovan Rajevac since Ghanaians have lost trust him going into the Qatar 2022 FIFA World Cup Qualifiers (playoffs) in March.

Again, the ministry advised Ghana FA to dissolve the Black Stars management committee and reconstitute it.

Ghana will return to action in March in the final qualifying round of the 2022 Fifa World Cup.

From our deep sources, Ghana FA would have to pay Milovan Rajevac $270,000 as compensation if sacked plus $130,000 as signing fee, making it a total of $400,000, which makes it a difficult decision to take by the Football Association.