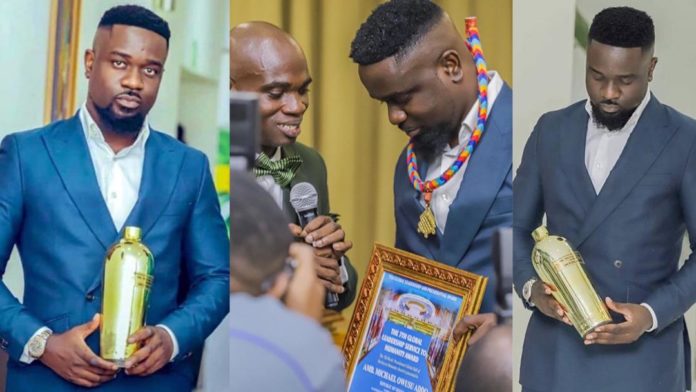 Multiple award-winning rapper Sarkodie and other celebrities are being trolled on Twitter after receiving alleged fake award from a supposed representative of the UN and the Kofi Annan Foundation.

The ceremony dubbed Global Leadership Service to Humanity Awards was held on 28 August 2020 with some well known dignitaries in the country being awarded.

Dr. Wayne Winston Aka Dr. Kwame Fordjour has claimed multiple times he went to the Harvard Kennedy School. Checks reveal that he didn’t indeed attend Harvard. This was his response when probed on the subject. pic.twitter.com/SAb34Wg2yM

The Ghanaian celebrities have therefore come under intense public backlash for failing to do background checks before jumping on board for the awards.

Other personalities who also received the awards include TV icon Berla Mundi, Hughes, Nathaniel Attoh, Chairman Wontumi, Vice-Chancellor of the University of Ghana amongst others.

Ebi like na the woman saf know say the award be fake. Gh hushpuppi, Nam1's brother we hail you😏😏😂 pic.twitter.com/uLRxo6cUPK

NDC to expand water, electricity for All – Asiedu Nketia