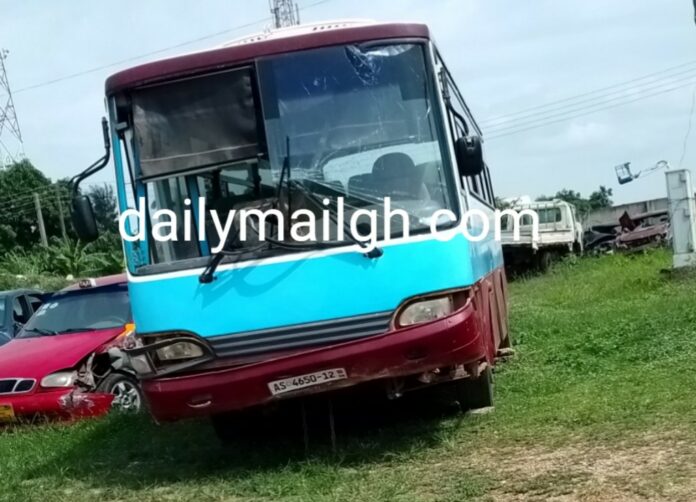 A school girl and a female teacher were killed when their crowded bus got involved in an accident Monday evening, the police confirmed to dailymailgh.com.

This happened around 5:00 p.m. on the Ahodwo stretch in Kumasi when the bus was carrying pupils and some teachers of the Mind Top Academy to their various homes.

Sources have identified the deceased teacher as 27-year-old Margaret Boadi and the pupil has been named only as Habiba.

The suspect driver Vasco Ohemeng, 47, was immediately arrested when he reported the incident to the police at the Asokwa Division, officials say.

On the spot investigation indicated that the victims jumped out while the driver was making efforts to control the vehicle which had a brake failure, the police said.

“So the vehicle ran over the teacher and she died at the spot. The school girl also suffered severe injuries and was rushed to the Komfo Anokye Teaching Hospital but she was pronounced dead shortly on arrival”, the police told dailymailgh.com.

Their bodies have been deposited at the Komfo Anokye Teaching Hospital morgue for preservation.

It was gathered that parents of the school girl had been notified and they had started processes to release her body for burial according to Islamic tradition.

The vehicle with registration number AS 4650–12 has since been impounded and the driver detained to assist the police in their investigations.

School authorities did not respond to calls for comments.