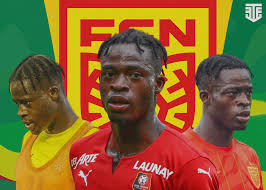 The 20-year-old had a blistering start to live in the French Ligue 1 after joining Stade de Rennes for the 2021-22 season.

He provided some crucial assists and wowed the French Ligue 1 enthusiasts with scintillating performances in the league and Cup tournaments.

He joined the club from Denmark Superligaen team, FC Nordsjaelland and took the French Ligue 1 by storm with his impressive showings in the league.

He wwas named as the best U21 Dribbler in Europe’s Top 5 leagues and was one of the youngster to help Ghana qualify for the 2022 FIFA World Cup tournament in Qatar later this year.

Huawei Watch Fit; The perfect smartwatch for everyone.