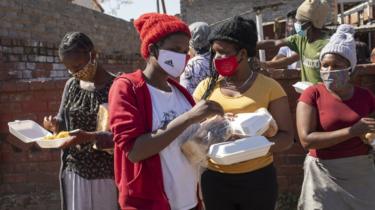 More than half a million coronavirus cases have been confirmed in South Africa, according to the country’s health minister.

South Africa is the hardest-hit country on the continent and accounts for half of all reported infections in Africa.

It also has the fifth-highest number of cases in the world after the US, Brazil, Russia and India.

Researchers have said the true number of deaths in the country may be far higher.

South African health authorities have said the rate of infection is increasing rapidly, with cases currently concentrated around the capital, Pretoria.

More than a third of all infections have been reported in Gauteng – South Africa’s financial hub, and a province that has quickly become the epicentre of the national outbreak.

Infections are not expected to peak for another month.

“We have to continue to work together to reduce the number of new infections. As with many other countries across the world, we need to continually adjust the measures we take to prevent new outbreaks or to safeguard our health system”, he said.

South Africa imposed a strict lockdown in April and May that slowed the spread of the coronavirus.

It began a gradual reopening in June but restrictions – including a ban on alcohol sales – were reintroduced last month as infection rates began to rise again. A state of emergency is also in force until 15 August.

The president tried to highlight the positive as South Africa reached its grim milestone in the battle against coronavirus. He pointed to a recovery rate of 68% and said the number of deaths was “significantly lower than the global average”.

But experts warn to be wary of statistics given the different criteria and methods used by different provinces – and comparisons with African countries where there has low levels of testing.

Yet even with such strict restrictions – it has been mandatory, for example, to wear face masks in public since May – social distancing is often impossible in South Africa’s densely packed townships, where the virus has been quick to spread during the winter season.

The president’s comments about investigations into allegations of corruption over the procurement of medical supplies – some alleged to implicate his own aides – perhaps underline the crux of the problems facing the country’s health system. “It is unconscionable that there are people who may be using this health crisis to unlawfully enrich themselves,” he said.

The influx of patients has put an incredible strain on South Africa’s hospitals, and a BBC investigation found an array of systematic failures that had exhausted healthcare professionals and brought the health service near to collapse.

President Ramaphosa said last month that 28,000 hospital beds had been made available for Covid-19 patients but the country still faced a “serious” shortage of doctors and nurses.

Last week the World Health Organization (WHO) warned that South Africa’s experience was a likely a precursor to what would happen across the rest of the continent.

So far African countries have generally reported low death rates per capita compared to other parts of the world.

The WHO says this could be partly because of the relatively young population in Africa – more than 60% are under the age of 25. Covid-19 is known to have a higher mortality rate for older age groups.

Check how a Ghanaian style coach felt displaying her cleavage

Soldiers in Gomoa robbery case handed over to Military police