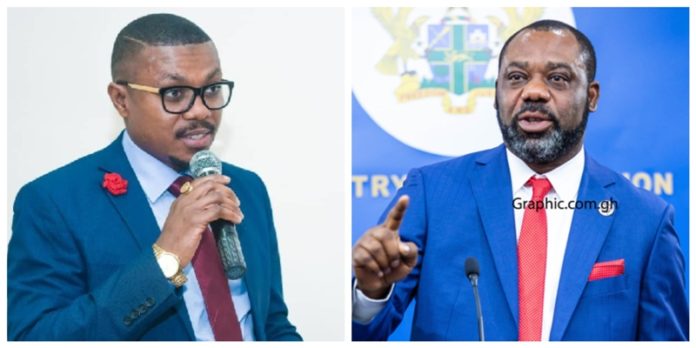 The Minister of Education Dr. Mathew Opoku Prempeh and the Executive Secretary of the National Council for Curriculum and Assessment (NaCCA) Dr. Prince Armah, have denied receiving scholarships to pursue further studies under the current government.

Ghanaians are incensed on social media following an audit report that Prempeh and Dr. Armah including other government appointees were granted scholarships by GETFund to support their education.

Reacting to the news, GETFund clarified that the officials were given the scholarship years before the current Akufo-Addo administration, adding the Act which sets up the Fund “is not limited to needy but brilliant students.”

“The Fund may, per its mandate, also provide support for such other educational activities and programmes to serve strategic national interests.

“The above having been served, it is worthy of note that the aforementioned persons have not been awarded scholarships by the Fund under the current administration,” the GETFund statement read.

The Education Minister and the NaCCA boss have both reacted to the various media reports below:

I have noted with disappointment a news story carried in some sections of the media, notably myjoyonline.com and echoed on social media, which suggests that I abused my position as a government appointee to procure a scholarship from the Ghana Education Trust Fund for studies in the United Kingdom.

First of all, had any of these media houses attempted the barest due diligence, including but not limited to a check on my publicly available records, they would have noticed that my studies at the Aberdeen University in the United Kingdom predated my entry into public service by at least three years.

However, for the avoidance of doubt, let the following be noted.

In conclusion, I urge the public to disregard this palpably false story that is driven purely by the worst political instincts that we must work to banish from my nation, while we actively work to expand opportunity and bridge the social and economic inequalities in our nation, a task I am fully committed to in my duties at the National Council for Curriculum and Assessment.

According to Act 581 (GETFund Act 2000) which sets up the GETFund, the objects of the Fund are as follows:

2. (1) The object of the Fund is to provide finance to supplement the provision of education at all levels by the Government.

(2) For the purpose of attaining this object, the monies from the Fund are to be expended as follows: (a) to provide financial support to the agencies and institutions under the Ministry of Education, through the Ministry, for the development and maintenance of essential academic facilities and infrastructure in public educational institutions particularly, in tertiary institutions;

(b) to provide supplementary funding to the Scholarship Secretariat for the grant of scholarships to gifted but needy students for studies in second-cycle and accredited tertiary institutions in Ghana;

(c)to contribute monies from the Fund towards the operation of student loans schemes for students in accredited tertiary institutions through loan scheme mechanisms and agencies, approved by the Minister;

(d) to provide, through the National Council on /tertiary Education, grants to tertiary institutions,(i) to train brilliant students as members of faculties;(ii) to undertake research and other academic programmes of relevance to national development; and(e) to provide monies to support such other educational activities and programmes for the promotion of education as the Minister in consultation with the Board may determine.

Ghana has experienced no food shortage because of my ‘bold policies’...