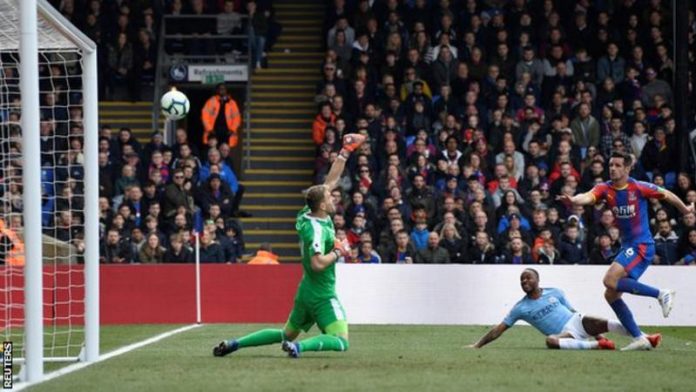 Raheem Sterling scored twice against Crystal Palace to inspire Manchester City to a ninth straight Premier League win and send Pep Guardiola’s side to the top of the table – if only for a few hours.

With title rivals Liverpool hosting Chelsea in the late kick-off (16:30 BST), City moved one point clear at the summit after a dominant performance at Selhurst Park.

England winger Sterling’s instinctive finish after Leroy Sane’s pass doubled the lead before Palace, who are 11 points above the relegation zone, reduced the deficit through Luka Milivojevic’s late free-kick.

Substitute Gabriel Jesus extended City’s lead with a smart finish – City’s 150th goal in all competitions this season – to leave his team one point clear of Liverpool with five games remaining in a fascinating title race.

However, Liverpool will return to the summit if they beat Chelsea later in the day.

City were forced to endure one or two nervy moments after Milivojevic’s 12th top-flight goal this season gave the home side hope but, in truth, the visitors were superior from start to finish.

Having looked ordinary edging past Brighton in the FA Cup semi-final last weekend before losing in the Champions League at Tottenham on Tuesday, Guardiola’s side returned to their majestic best in south London.

De Bruyne, left out against Spurs in midweek, sparkled on his return to the starting line-up but it was Sterling who caused the real damage, scoring more than once away from home for the first time in his City career.

He could even have scored his third hat-trick in five weeks for club and country but, after firing wide from eight yards in the 10th minute, quickly atoned.

He showed electrifying pace to open the scoring after De Bruyne’s perfect pass and Palace were fortunate to only be 1-0 behind at the interval as they found themselves under relentless pressure.

Guaita produced a palm-stinging save to keep out Sane while Palace’s Spanish keeper had to make a smart stop to prevent Martin Kelly scoring an own goal before Sterling made it 2-0, finishing off a lovely move that involved David Silva and Sane.

The only minor disappointment for City, who had Benjamin Mendy making his first league start since November, was that they were unable to make it five league wins without conceding in a row.

With Jesus’ late strike giving the score a more reflective look, City will head into Wednesday’s Champions League quarter-final second leg in confident mood as they look to overturn a one-goal deficit.