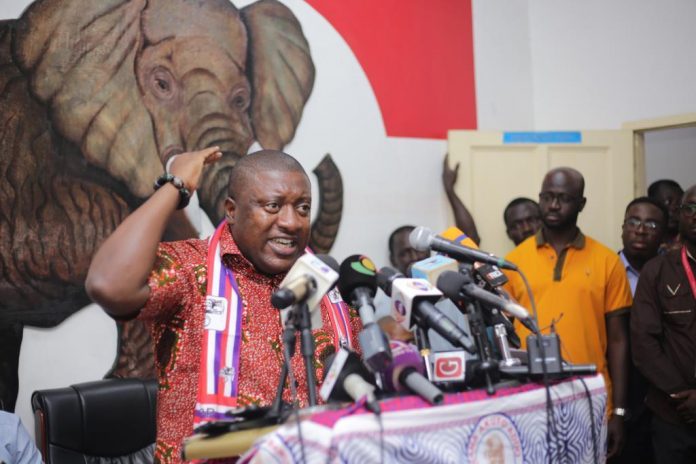 The ruling New Patriotic Party (NPP) has accused the National Democratic Congress (NDC) of lacking the ideas and vision to engage in an issue-based campaign, ahead of the 2020 general elections.

According to the NPP, the content of the press conference by the main opposition on Tuesday, shows clearly that, they have nothing to contribute in the competition of ideas and performances.
At a press conference in Accra on Wednesday, the National Youth Organizer of the party, Nana Boakye (Nana B) accused the NDC of reducing the 2020 campaign to one of playing tribal politics, and their bogus list of family ties against President Akufo-Addo.

“What the NDC is doing is clear that, they want to play the discredited Ashanti vs Akyem card; Akans vs Non-Akans card. It is a hopeless and irresponsible agenda by an opposition party that is empty of ideas and empty on performance,” he stated.

The NDC, he said, should tell Ghanaians their alternative for the numerous policies and programmes of the Akufo-Addo government.

“They should tell us their alternative for Free SHS, planting for Food and Jobs, the payment of the various allowances and others,” he added.
The NPP’s National Youth Organizer said the next general elections is about Vision 2020, and not for those who have no vision.

“In 2008 he promised free secondary education. He stuck to it in 2012 and stayed with it in 2016 and has delivered on it in office. He campaigned on Ghana’s industrialization and adding value to our natural resources… Today, he has set up the Ghana Integrated Aluminium Development Corporation to add value to Ghana’s one billion tonnes of bauxite. It is this same bauxite that John Mahama signed away to his younger brother, Ibrahim Mahama, one week before NPP took office. President John Mahama gave 80% of our bauxite, valued at least $200 billion. Please, listen carefully, over $200 billion, of our national asset was handed over to one person, who is the younger brother of the President who dashed it to him before leaving office. It took the new government and the Supreme Court, in unanimous decision, to show that what John Mahama did was illegal,” he explained.

Police: “Lebanese” who threatened to slit the throat of a Ghanaian...