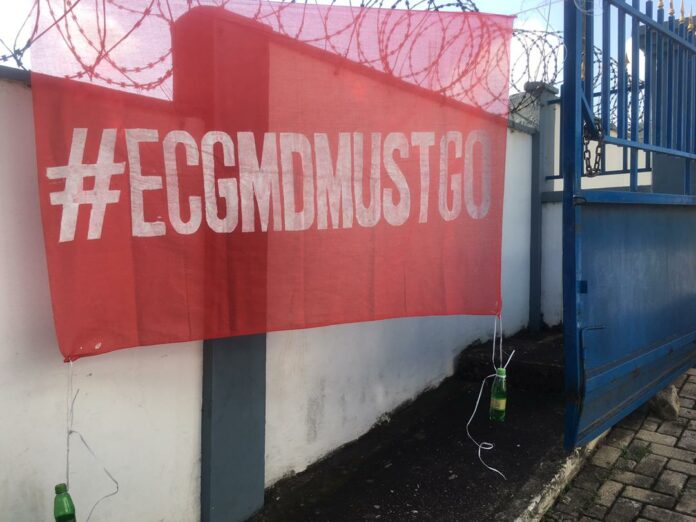 Employees of the Electricity Company of Ghana risk losing their jobs for staging what has been described by the National Labour Commission (NLC) as an “illegal” sit-down strike.

They have thus been ordered to call off their strike with immediate effect, a statement from the NLC said on Monday.

The Commission wants the agitated personnel to return to post and ensure that their concerns are “properly placed before the commission for redress.”

Workers of the ECG on Monday morning protested against the Managing Director of the company describing him as incompetent.

The workers claim the MD has, among other things, misplaced the company’s priorities leading to “the unavailability of critical materials such as meters, service cables conductors, prepaid vending accessories, maintenance materials, which has caused delays in connecting and supplying customers who have paid for such services.”

As part of the protest, pieces of red cloth with the inscription ‘ECG BOSS MUST GO’ were also sighted at the entrance to the VRA building in Accra.

But in a communiqué signed by NLC’s General Secretary Ofosu Asamoah, the Commission posited that the staff have not exhausted all means in getting their voices heard.

“The National Union is hereby advised to ensure that the proper processes in resolution of the workers’ grievances are adhered to and call for a halt in the industrial action,” the April 26 letter read.

Advancing his argument on Accra-based Joy FM Monday night NLC Chairman Mr Ofosu Asamoah said: “The Commission will meet on Wednesday and it is one of the issues that will be considered. The [strike] action is illegal so we are telling them desist from it and make a formal complainant to the National Labour Commission if negotiations have broken down”.

“If the action continues tomorrow [Tuesday] the Commission will take the legal steps to have it stopped and the perpetrators of the strike could have their appointment terminated without notice that is what the law provides “, he further noted.

Mr Agyeman-Budu has already rejected the claims made by the staff insisting that the company has rather chalked successes under his leadership.

Prepare to pay more road tolls if I become Minister –...

Ghana’s economy has significantly improved under Akufo-Addo and Bawumia – Turkson...