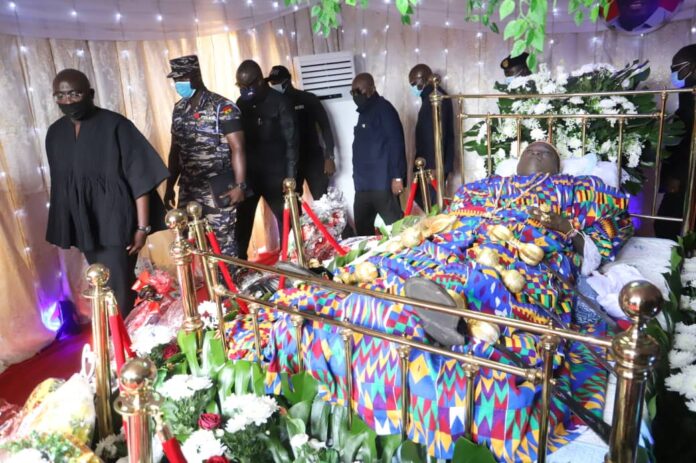 The remains of Ekow Kwansah Hayford, former MP for Mfantseman in the Central Region, arrived on Saturday which saw hundreds of people pour onto the streets in a burst of grief and anger.

The reception to Hayford’s assassination in October has already been compared with the burial of JB Danquah Adu, another MP who died during an attack on his home in Accra in 2016.

Ghanaian leader Akufo-Addo who had pledged “justice” in response to Hayford’s killing, led a government delegation to the Mfantseman Municipality.

Other dignitaries including MPs joined a sea of mourners to pay their last respect to the New Patriotic Party (NPP) MP who was killed while returning from a campaign tour in October.

He protected the children and me

Security was beefed up at the Mankessim school park where the slain MP was laid in state.

In paying her last respect to her departed husband, wife of the late MP and now NPP Parliamentary Candidate for Mfansteman, Madam Ophelia Hayford, said she was still devastated by her husband’s passing.

He “did everything to protect the children and me,” she said amid tears.

She also recalled that he was always “full of smiles and unconditional love,” in her tribute.

The General Secretary of the New Patriotic Party, John Boadu, who read a tribute on behalf of the party, said the best departing gift would be to win the Mfansteman seat for the NPP.

“He identified himself with the grassroots”, the NPP scribed said as he eulogized the former MP.

“It is right to say that the greatest tribute that the good people of Mfantseman can pay to honour your memory is to vote for your replacement, the NPP Parliamentary Candidate, Madam Ophelia Hayford”, Mr John Boadu said.

At least eight persons have been arrested in connection with the killing of the late legislator who serviced as a member of the judicial, interior and defence committees in Ghana’s parliament.

His sudden death has forced the government to provide 24-hour security for all 274 members of parliament.