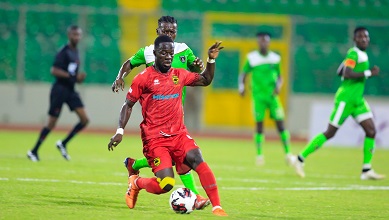 The home team played with with confidence in the game right from the blast of the referee’s whistle with some scintillating and good passing football.

It was a fairly balanced game at the Ohene Ameyaw park in Techiman as both teams settled into the game after 15 minutes with nice play.

The home team took the lead late in the first half but their goal was ruled out for offside by the assistant referee who raised his flag to deny the home team from taking the lead.

Kotoko goalkeeper Kwame  came to the rescue of the Porcupine Warriors team on several occasions as Wonders threatened to score with good chances created.

After the break , the home continued being slightly ahead of their opponents as it took goalie Kwame Baah to save Moro Sumaila’s last minute effort to secure a point for the visitors.

The goalless stalemate takes Kotoko to 45 points and maintain top spot of the Ghana Premier League table as Eleven Wonders find themselves 17th on the table with 21 points.

Ken Ofori-Atta writes: There is a lump in my throat as...