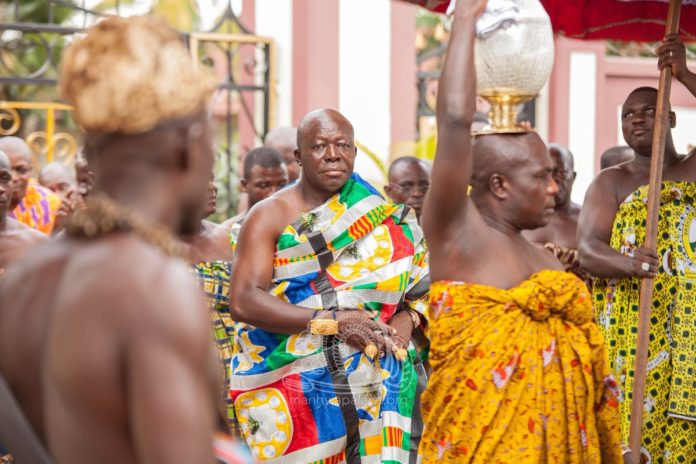 For all the reverence accorded the sky-borne Sikadwa Kofi among the Ashanti, the Kingdom’s greatest power resides in the Mpomponsuo.

On April 26, 21 years ago, bare-chested Barima Kwaku Duah wielded that sword with all the strength his 48-year-old arms could muster. In ten days, he would turn 49, but first — a weighty oath later — he’d become Ghana’s most celebrated monarch: the 16th Asantehene, Otumfuo Osei Tutu II.

With that, he assumed control of Asanteman, a rich institution sparkling with gold and history. And, like every Asantehene since the mid-1930s, Osei Tutu II was entrusted with responsibility for another institution: Asante Kotoko Sporting Club. All his life, he had been groomed for kingship; what he wasn’t quite ready for, per his own admission in late 2017, was Kotoko.

“I knew nothing about football . . . and if not for the virtue of being Asantehene, I would not have gotten close to Kotoko and football,” he said, when the club called on him to present their last ‘major’ trophy won.

“As I sit here, I do not even know much about football rules and how it’s played — but Kotoko is part of the legacy I inherited and I am obliged to ensure the team achieve success.”

With that in mind, then, just how have Kotoko fared in his charge?

The last 21 years of his predecessor, Opoku Ware II, saw Kotoko win ten league titles and three FA Cup trophies; in 1983, a second African Cup of Champions Clubs crown was also bagged. The final of the latter competition was reached twice more in that period, along with as many semi-final finishes.

To be fair, Kotoko hadn’t enjoyed much success in the years leading up to the current Asantehene’s enstoolment: their last major title had come a year prior in the FA Cup, but they’d gone without league glory in the five preceding seasons, with regional cousins Obuasi Goldfields and archrivals Hearts of Oak holding sway.

Kotoko were good at the time — just not good enough. A day before the Asantehene’s ascent, to illustrate, Kotoko had beaten RTU 2-1, but Hearts, champions in the two previous seasons, thrashed Hasaacas 5-1; you get the picture. That campaign ended with the club fifth on the league table, a dozen points behind winners Hearts.

Kotoko had struggled in Ghana’s first decade of professional football, and the hope was that the second would prove much better under a new Life Patron. It did, eventually, but only after a few years of fine-tuning. The next league title finally arrived in 2003, a full decade after their last. In the ensuing period, Kotoko, with another five league triumphs and two FA Cups, have barely managed to restore their domestic dominance.

There’s a general feeling that Kotoko are a few honors — continental, especially — short of their real potential. Just twice have Kotoko appeared in the final of an African club competition — the now-defunct CAF Cup Winners Cup, and its successor, the CAF Confederation Cup — yet they failed to win either, the most recent coming 16 years ago. In the more prestigious CAF Champions League, the club has enjoyed far less success, only once making it as far as the group stage — never beyond.

They’ve not gotten it right enough on the pitch, but the real issues have cascaded from the club’s hierarchy. Its day-to-day management has been handled like a circus — a game of musical chairs, if that sounds any kinder — and all that instability has reflected in Kotoko’s technical affairs; the knock-on effect on the playing body, constantly in a state of flux, has yielded far less than a club of such might is capable of.

And the administration hasn’t always been great: good at the best of times, shocking at the worst. Short-termism, amateurish business practices, petty turf wars, divisive personality cults, and a needlessly wide web of hangers-on have often stripped Kotoko bare, set up for the sort of derision that hardly does the image of Manhyia — the seat of Ashanti power and Otumfuo’s official residence — any favors.

Take, for instance, the present situation that sees Kotoko ordered by FIFA to pay up for the transfer of a player — Emmanuel Clottey — from Tunisian outfit Esperance five years ago, or face the very real risk of relegation. It has left the club in disarray — not for the first time — and Manhyia stepping in to find a quick resolution. To those around when Otumfuo first took up Kotoko’s reins, it is rather painfully obvious that the club’s stock has since fallen sharply. Those were the days of Herbert Mensah at the helm, when Kotoko operated fairly smoothly and set the pace for professionalism in the Ghanaian game.

Following his exit, however, things have only taken a nosedive, with too little to celebrate. Strides have been made at irregular intervals, and where Kotoko — Africa’s finest club of the previous century, according to the IFFHS — once rubbed shoulders with other continental heavyweights, they’re now not even fit to kiss the feet of the Ahlys, Zamaleks, and TP Mazembes. And, really, how could they — a debt-ridden club whose thuggish fans could just turn up to disrupt training sessions, and whose website exists only in name?

That Manhyia’s ties with Kotoko — sometimes too loose, sometimes too tight — might just be at the root of these struggles is only whispered, but one wonders whether or not Otumfuo’s no-interest-in-football concession reduces him to no more than a figure-head. Whatever the case, Manhyia is where the buck stops, but it shouldn’t merely play a backstopping role, content with thrusting an arm just in time to save the club from running itself down.

More active — and decisive — involvement is required, and Otumfuo must bring his Solomonic attributes to bear now, more than ever.

PREMPEH @70: Seven Things You Probably Didn’t Know About the College