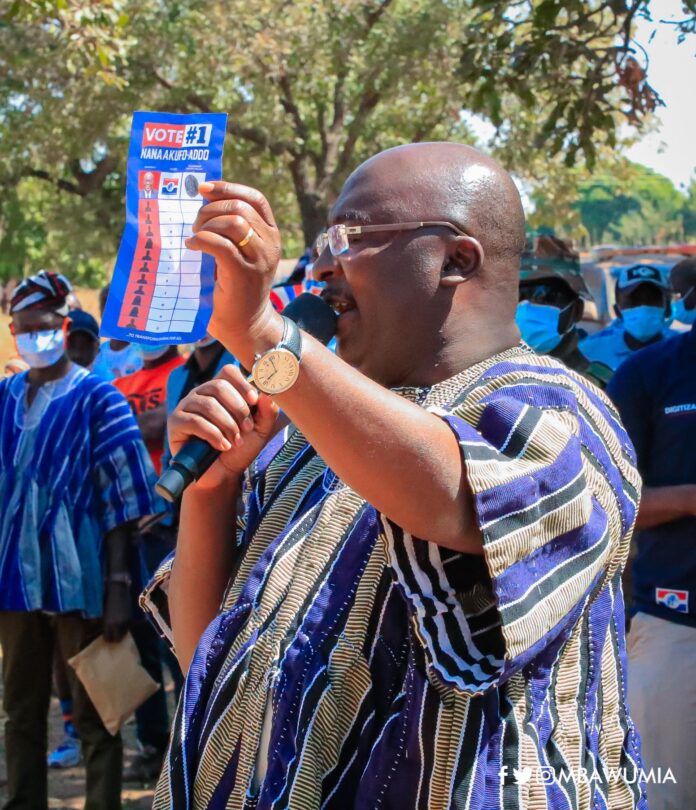 Speaking during an interaction with chiefs and people of Gbankoni in the Bunkpurgu Constituency in the North East Region, Vice President Bawumia said, after getting the opportunity to be in office for eight years as Vice President and President and neglecting the people of the north, leading to his massive rejection four years ago, the former President Mahama is back preaching politics of hypocrisy and deceit.

“A few days ago, the former President, John Mahama, was in Bunkpurgu saying the NPP government has not demonstrated any care for the Bimobas and asking them to vote for him to be President again.”

“This is John Dramani Mahama who was in office for eight years and cannot show what he did in Bimoba land and he is coming to say NPP, which is doing so much hasn’t done anything for the people. This is what I call ‘munaafiki’ politics (politics of hypocrisy). We don’t want munaafiki politics.”

“You were in government for eight years and you did very little for the Bunkpurugu constituency . The NPP has been in office for just 4 years and if you ask us what we have done for our people, we will tell you what we have done. We have Planting for Food and Jobs which is helping our farmers. We have One Village One Dam, One Constituency One Ambulance, One District One Factory, we have NABCO and we have Free SHS. We have infrastructure projects in virtually every community in Bunkpurugu constituency.

“So we know, as for the government of Nana Akufo-Addo, we can point out what we have done, but John Mahama cannot point out what he did for the Bunkpurgu Constituency .”

“He got the opportunity to be in office as Vice President and President for eight years but he neglected the people of the north and he was rejected.”

“He has no legacy in Bunkpurugu constituency but he is going round asking for your votes again.” Instead of talking about his record, he is rather saying NPP has ignored Bimobas.”

“The north has long seen through Mahama’s politics of tribalism.”

Dr. Bawumia noted that president Akufo-Addo understood the real needs of the Ghanaian people after extensive consultations across the country prior to the 2016 elections, hence the government’s many pro poor interventions and all-inclusive development policies.

“The government of Akufo-Addo has proven that it is a government for the people because of it’s all inclusive policies as well as infrastructure development.”

To buttress his point of the NPP government’s inclusive government policies, the Vice President recalled his visit to the area in 2016 and how he took note of the challenges of the people, which he said have been addressed – a claim, which the Chief of the area confirmed.

“In 2016, I came here to interact with you when I was not the Vice President. The Chiefs told me about the problems of this community such as lack of water, electricity, health center and poor roads. I said that I will help if we come into office by Allah’s grace.”

“By the grace of Allah, we came into office and today, I am here as Vice President. We have been able to provide electricity, provided water and built a chip compound for healthcare. We are also working on the roads and the Nalerigu Bunkpurugu road is also being fixed.”

The Vice President urged the people to vote for President Akufo-Addo for more development, and reject Mahama’s “munaafiki” politics of hypocrisy and deceit.

“President Akufo-Addo is running an inclusive government. So next time the former President Mahama comes with his ‘munaafiki politics, you should ask him what he did for Bunkpurugu consitituency and the Gbankoni and Kombatiak community during his eight years in office as Vice President and President. He should list what he did, community by command we will start the debate”

“The only choice that we have next week, which will bring development to our people is number 1. So when you go and you’re given the ballot paper, choose Nana Akufo-Addo and the elephant at number one. And then choose the NPP Parliamentary candidate as well.”

The Paramount Chief of the area commended Dr. Bawumia, whom he said is the only Vice Presidential candidate and Vice President to visit Gbankoni and its surrounding community.

He also thanked Dr. Bawumia and Preaident Akufo-Addo for responding positively to their requests for electricity, road and health centre in 4 years, predicting that they will win next year’s elections massively.

The Vice President has over the past few days intensified his campaign in the northern part of the country.