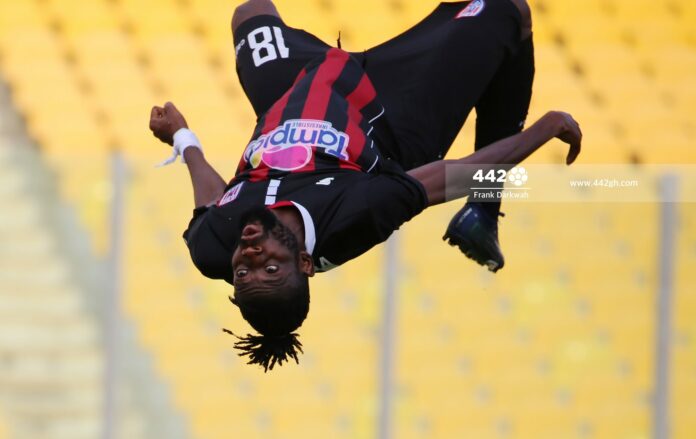 1LEGON CITIES ARE A COURTEOUS BUNCH

That infuriating visitor who just won’t respect you, themselves, and general etiquette?

Yea, we’ve all hosted a couple of those guests who do just the stuff they aren’t supposed to — from overstaying their welcome to overindulging in whatever is/isn’t offered. If there’s any Ghana Premier League club that strives to stay clear of such misbehavior, though, it’s Legon Cities, and their game on Friday against Asante Kotoko was fresh proof. The Royals rarely ever take any points from their hosts and, even when they do, they are usually courteous enough to split ’em up. Zero away wins from their last 29 matches, stretching all the way back to March 2017 (when, by the way, they were still known as Wa All Stars)?

Okay, so this isn’t exactly about the latest matchday, but TSR couldn’t let it slide. Faisal had waited 17 games for their first victory since last year’s return to the Premier League, and it finally happened in their third match this season, against Inter Allies. But then came, almost immediately, the Ghanaian elections that threatened to sweep Faisal’s long-awaited, well-earned accomplishment under the radar — not on our watch, though!

Hearts of Oak are finally heading in the right direction, TSR can confirm — and it’s not just because they absolutely thumped Dreams FC on Sunday. Our observation is, quite literally, deduced from their third goal in said game, a product of three consecutive headers: the first by a Dreams player who poorly tried to clear Kwadwo Obeng Jr’s lofted cross, a second from Hearts midfielder Benjamin Afutu on picking up the resulting loose ball, and onto the head of young Michelle Sarpong for the finish.

For Kosta Papic, the Phobians’ new head coach, the weekend couldn’t have gone much worse. Kicking off his second stint at the club with a 3-0 win — not the easiest result to top, really — ensures the Serbian has likely set himself up to fail going forward. But, of course, that’s what you get for being a bloody show-off on your first day at work. No sympathies, sir.

No brutalities recorded in voter register demo in my time –...