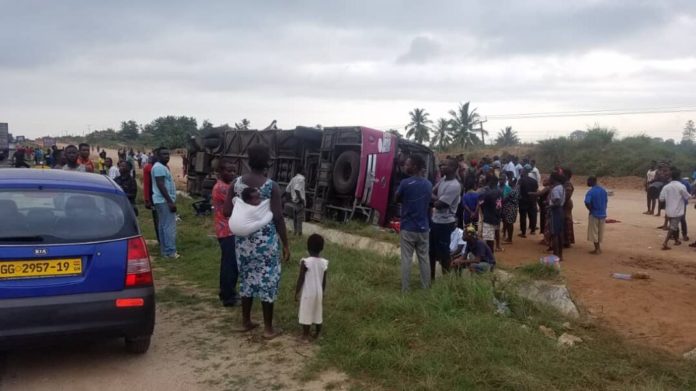 Three persons have died after two vehicles crashed on the Suhum-Nsawam highway.

The collision happened on Saturday at about 01:45 local time at Beposo, near Teacher Mante in the Eastern Region.

The accident involved a DAF articulator truck with registration number AE 1913–12 loaded with agrochemicals and a KIA bus with 31 passengers onboard travelling from Kumasi to Aflao.

It is gathered that on reaching a section of the highway, the driver in the KIA bus in an attempt to overtake a vehicle ahead of him crashed into the articulator truck coming from the opposite direction.

Three persons who were in the bus were confirmed dead at the spot, a police incident report sighted by dailymailgh.com read.

The remaining occupants who sustained varying degrees of injury were rushed to the Suhum Government Hospital for treatment.

The KIA bus which run into a ditch at the opposite lane had landed on its offside body with its wheels facing the road.

The Ghana National Fire Service later joined the police to help move the mangled vehicle off the road.

Ghana records close to 2000 cases of road accidents each year.

Over 300 deaths have been recorded between January and February 2020 alone.

An accident on the Kintampo highway for instance claimed the lives of at least 31 persons.

Many of the victims were yet to be identified as some got burnt beyond recognition in the bizarre accident.