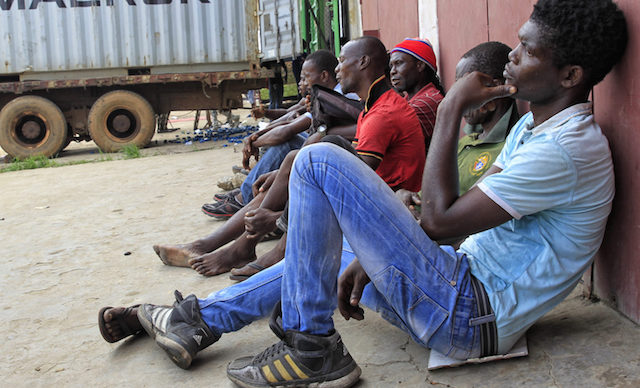 As at 2018, the unemployment rate in Ghana was 6.7% for people aged 15 years and above – translating into about 2 million Ghanaians without jobs, according to the International Labour Organization (ILO). Afrobarometer’s survey findings also show that unemployment is the most important problem that Ghanaians want government to address and that among the United Nations’ Sustainable Development Goals, SDG8 focused on promoting sustained, inclusive and sustainable economic growth, full and productive employment and decent work for all, is the highest priority for Ghanaians (cited by 62% of Ghanaians). Again, Afrobarometer data shows that four in 10 Ghanaians have considered emigrating, and that more than half (53%) of those who have considered emigrating want to do so to find work. It is therefore not surprising that citizens of all ages consistently rate their government’s poor on job creation.

Experts within the employment and education sectors who participated in a breakfast meeting on youth unemployment, organized by the Ghana Center for Democratic Development (CDD-Ghana) and the International Research and Exchanges Board (IREX) have agreed that Ghana will be able to stem the tide of its unemployment, especially, among the youth, if the nation takes concentrate steps to change the mind-set of citizens towards job creation and entrepreneurship.

Organized on the theme: “Creating Jobs & Entrepreneurs for a Self-reliant Ghana,” the event triggered a deeper conversation on how government and other stakeholders can harness the potential of the youth, while taking a critical look at the various ongoing youth entrepreneurship initiatives to solve the unemployment problem in the country.

Professor H. Kwasi Prempeh, Executive Director of CDD-Ghana, believes it is critical for the youth to have a stake in the economy because the dangers associated with their inability to have access to employment opportunities cannot be ignored. He noted that the much-touted ‘Ghana Beyond Aid’ agenda cannot be achieved and sustained if attention is not paid to job creation and the conscious investment in the country’s human resource base. Skills building and job creation must be encouraged, innovations and entrepreneurial ideas must be supported.

The US Ambassador to Ghana, Her Excellency, Stephanie S. Sullivan also iterated that no country can thrive unless the youth are made a priority and are given the tools and support they need to create their future.

“It is up to us to create an environment that helps develop the youth’s skills and encourages creativity and entrepreneurial spirit, not only for their sake but also for the good of our communities and our nations,” she said. “Without opportunity, chronic unemployment and illegal migration will keep threatening every country’s development plans.”

To Dr. Kristen Lord, the Chief Executive Officer of IREX, although no silver bullet solution to the issue of youth employment exists anywhere, Ghana, like many African countries, already has the structures to help manage the problem effectively.

She therefore, encouraged the managers of the country’s educational system to introduce critical thinking and the development of soft skills into the already existing educational curriculum to help shape the minds and abilities of students.

Mawuena Trebarh, Founding Director & Chief Business Strategist at Inspire Africa Consult called for a bridging of the gap between the private sector and academia – a gap she described as “relatively poor.” Mrs. Trebarh, who once served as the CEO of the Ghana Investment Promotions Center (GIPC), noted that academic institutions should be made aware of the kind of investments which would be coming into the country with the next five to 10 years so as to allow academia to prepare young people to benefit from these investments which according to her, are evolving very fast due to technological advancements, changes in channels of communication, among others.

“The mind-set of the young Ghanaian, the young African is that perhaps, I need to be looking at something that will give me a certain level of economic stability,” she said. It’s really important that we re-orient the mind-set of our young people and encourage them to think very innovatively – not just about the idea they are trying to tackle because the idea is what will generate the potential profit, but the concept of what is means to be an entrepreneur.”

On his part, Mr. John Kumah, the Chief Executive Officer (CEO) of the National Entrepreneurship and Innovation Plan (NEIP) stated that the government in rolling out a lot of targeted initiatives to equip start-ups to scale-up their operations, to enable them create more jobs for others to benefit.

“The NEIP seeded with $100million to support start-ups in the country. Last year, during the first call for proposals, we received 7,000 applications from start-ups across the country. We trained all the 7,000 and supported 1,350 of them with a minimum of Ghs 10,000 working capital and a maximum of Ghs 100,000. It is not free money though because we need to sustain the project. It [the money] is recoverable and you have up to two years’ repayment period and it’s only 10% per annum,” he said.

Mr. Kumah however, urged private sector businesses to recognize that they have a role to play in solving the unemployment problem in the country.

“Maybe government can give incentives such as tax holidays to encourage some of these banks to understand that they must also contribute to supporting start-ups,” he added.

While stressing the importance of using data to guide policy making and the design of employment programs, Dr. Louise Fox, USAID’s Chief Economist, encouraged government to strictly supervise the numerous investments it is making on the job creation front to ensure value for money.

At the end of the discussion, the experts called for deliberate collaboration, information and resource sharing among all stakeholders, in the bid to succeed in creating enough room in the economy to accommodate the increasing population.