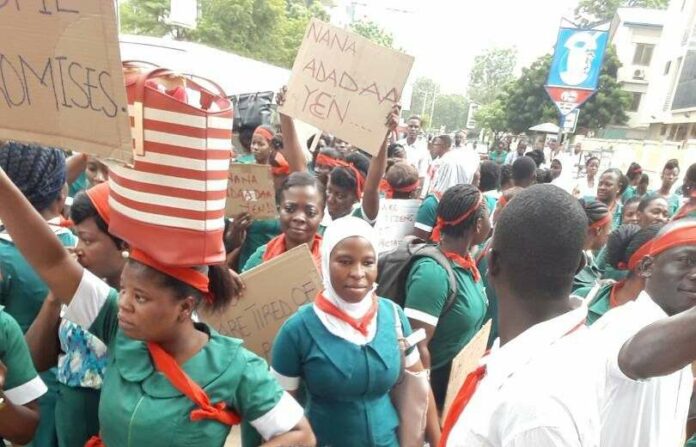 Trainee Nurses and Midwives across Ghana have launched a desperate appeal to the government to pay them eight months of their allowances.

This was contained in a statement issued by the Ghana Nurse-Midwife Trainees’ Association (G.N.M.T.A) on Sunday, April 25, 2021.

The over 80,000 students who are receiving training in various public and private institutions say the situation is taking a dire toll on them.

“Notwithstanding, as a Government that has urged its people to be citizens and not spectators, we wish to use this role of us being citizens to crave the indulgence of the President, H.E Nana Addo Dankwah Akufo-Addo and the government of the day on the halt in payment of the trainee allowances since June 2020 which has posed a lot of threats and difficulties to the trainee nurse and midwife. Similarly to note, some students are being owed arrears for the past 13 months.

“Moreover, the Ministry of Health in 2019 came out with a directive that students upon reporting to school are expected to pay 60% of their total fees before they are allowed to attend lectures. It is an undeniable fact that students from poor backgrounds depend solely on the allowance but due to the failure of the government to do so in that regard, students are psychologically traumatized by the humiliation of just not being in the capacity to pay their tuition bills coupled with the brunt of losing lectures”, parts of the statement read.

The statement further added that attempts to get officials at the Ministry of Health to resolve the issue has yielded little results.

The leadership of the G.N.M.T.A has thus issued a one week ultimatum to the government to resolve the issue.

“To this end, we wish to sternly give the Government an ultimatum of this week with effect from 26th April, 2021 to get these allowances paid or reach a fruitful consensus with various heads of Health Training Institutions to be considerate enough to reach flexible terms to allow students to pay fees and as well allow students to sit for the end of semester exams”, the statement noted.

The President of the Republic, Nana Addo Dankwa Akufo-Addo in September 2017 restored the nursing allowances of health trainees, comprising nurses and midwives.

He indicated that each trainee would be paid their allowance of four hundred Ghana cedis (GH¢400.00) per person, for each of the ten months of the academic year.

The then NDC government in 2014 scrapped teacher trainee allowance, despite several calls to compel government to reintroduce it.

Nurses in the Upper East Region warned that the status of allowances would influence their vote in the 2016 December polls.

But government insisted the decision allowed it to expand various health and educational infrastructure in the country as well as remove the restrictions on admission to the various training institutions.

Former President John Mahama in November 2019 challenged President Akufo-Addo to fulfil his campaign promise of paying all the allowances of trainee teachers and nurses.

His action was triggered by the agitation of some trainees for their accumulated allowances to be paid.

Mr. Mahama said his administration had a plan to systematically migrate the trainees onto the student loan scheme in order to create room for an increased enrollment.