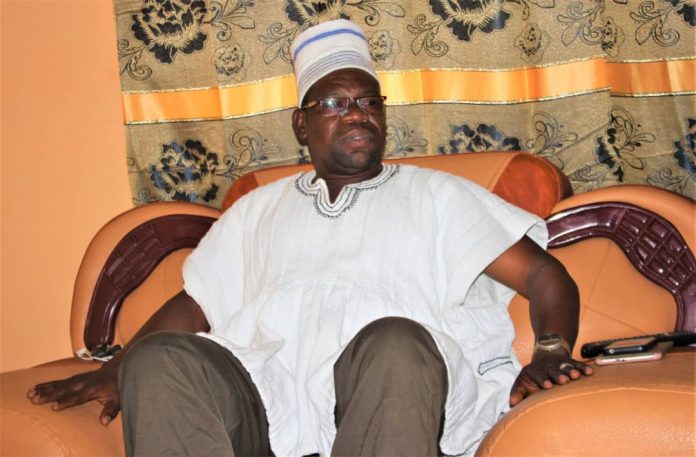 The paramount Chief of the Kologo Traditional Area in the Kasena-Nankana Municipal Assembly of the Upper East region, Naba Clifford Abagna Asobayire V, has urged the public to disregard reports of his removal from the seat.

He said reports making rounds that he has been destooled are false and untruth, adding they are being perpetuated by “bitter” members of the royal family, who lost to him during the contest for the Kologo Skin and want to dent his image and reputation.

Traditional Elders and the Asobayire family, headed by Francis Ayamwuni Asobayire, with a performance of some traditional rites at the Kologo Chief Palace Monday, announced the destoolment of Naba Clifford Abagna Asobayire V.

The family head announcing the decision stated accusations including disrespect for clan elders, the lack of accountability, transparency and high-handed rulership, as reasons for removing Naba Clifford Asobayire V, from the skin as the overlord of the Kologo Traditional Area.

Asobayire also made reference to a court case involving the paramount chief and the need for the Kologo royal family to protect the name of the Kologo skin from public ridicule, as some other reasons for ousting Naba Clifford Abagna Asobayire V.

But commenting on the incident for the first time Tuesday in an interview with journalists at the Kologo chief palace, the Kologo Naba flatly denied all the allegations, adding that he has become a victim of hatred, bitterness and bias.

He stated that persons who failed to beat him in the skin contest in 2018 are behind the “lies and total falsehood” targeted at “frustrating his chiefdom and making things difficult for him”.

“If your biological brother was subjected to a merciless and humiliating defeat in a contest to become a paramount chief, it is only your respect for the will of God and our ancestors that will make you like the winner. Everybody knows that I have become a victim of hatred, bitterness and bias because I defeated Mr. J.B during the contest to become the Paramount Chief of Kologo”.

Asobayire V maintains that he is the only and remains the true gazette Paramount Chief of Kologo, with a recognition in the National Register of Chiefs, and that the opinions of others have no effect on his legitimate occupation of the skin.

Asobayire dismissed sections of the report that he has become disobedient to elders and failed severally to honour their invitation, saying “I have never refused to honour any invitation from the Kologo Royal Clan or family to any meeting”.

Touching on the issue of misappropriation of monies paid as compensation to farmers whose lands were taken up for a government project, Naba Clifford Abagna Asobayire explained that the monies were paid directly into the account of a leader of the farmers for onward presentation to them, stressing that he had no involvement in how the funds were disbursed.

He explained, “The allegation that I gave lands to the Chinese is not true. It is a big lie. The land was given to a contractor who has been awarded the Kologo-Naaga road construction project. The contractor came to me with the Municipal Chief Executive, Hon. William Adum, and told me they were looking for a land to set up a mobilization point where they can keep their equipment and other tools. The land was released to them and they put up their building and it is there for all to see.”

“Compensation was given to the beneficiaries (farmers). I never took any money. The money was paid into the account of one of the farmers who is their leader. I don’t know how the money was given out and I never took part in spending or sharing the money”.

Commenting further on the allegations, the Kologo Naba believes his efforts to make things right and put a stop to certain ill practices in the area such as the felling of rosewood and other indigenous trees, has not gone down well with his detractors who have their hands in the illicit trade, hence their crusade to smear his person withlies and falsehood.

The Kologo Naba stated his readiness to honour invitations from neutral Kologo Clan or Family head to any meeting on matters that bother on the issues or development of the area. He however added that he will not engage with or participate in meetings with Francis Ayamwuni Asobayire since he doubts his neutrality on issues.

“I will henceforth never participate in meetings called by you (Francis Ayamwuni Asobayire). But I look forward to an invitation from neutral Kologo Royal or Family head on this and other matters”.

Meanwhiled, seven kingmakers and Elders of the Traditional Council have registered their disagreement with the announcement of vacancy of the Skin.

According to them, the process of his destoolment is “unlawful, inappropriate and unacceptable”.

They have therefore urged any individual or group of persons who have issues with Naba Clifford Abagna Asobayire occupying the skin as paramount chief to seek redress at the law courts.

They also warned about the repercussions the failure to use the proper channels in resolving the issues would have on the Kologo community and its people.

“It’s against traditions. Because nobody can perform sacrifices on the shrine (Dongo) except the Paramount Chief of Kologo. The sacrifice they did was inside someone’s house and that is not right per traditions and customs. It is a big lie if people go about saying (Reporting) that they have taken the Dongo away. It is still with the rightful Chief who has been enskinned.

“So all that has happened in this Palace or is being said about the paramount Chief is not true. The allegations are all lies and false. If anyone has any issue with the Chief, he should use the proper ways and solve they issues. The courts are there. We don’t want any blood shedding in Kologo because the people of Kologo are law abiding people,” Peter Akwara Asobayire, who added his voice on the matter warned.