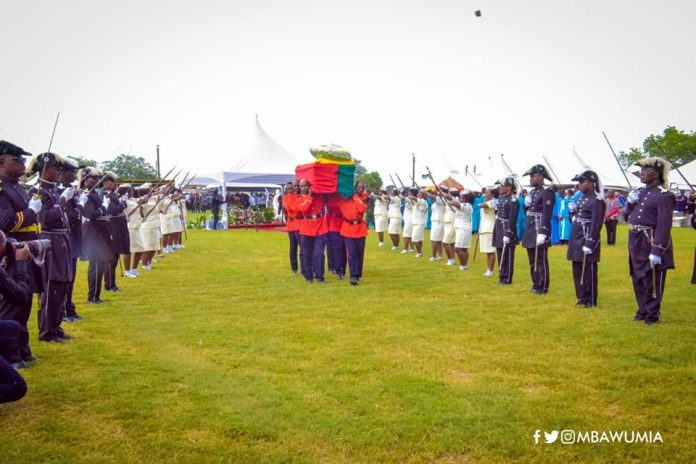 President Nana Addo Danquah Akufo-Addo has described the late C.K Tedam as “a rock” for his strong leadership and commitment to the New Patriotic Party (NPP), despite facing a distressful era when certain anti-party elements launched attacks targeted at destroying the unity and sense of purpose of the party.

He said through the great leadership that the late Tedam showed at the time, attempts to bring disunity and defocus the party failed.

“He played a valuable and unforgettable role in preserving the unity and stability of the party. C.K Tedam was a rock in that painful era of distress, when anti-party elements, occupying high positions in the party launched attacks against the unity and sense of purpose of the New Patriotic Party (NPP),” Mr. Akufo-Addo said at a State Burial Mass for the late Tedam at Paga in the Kasena-Nankana West District on Saturday.

“With the strong leadership qualities and devote happily, they failed. This and succeeding generations will always honour and treasure his memory,” he added.

President Akufo-Addo touted the great leadership of the veteran politician and eulogized him for his immense contribution to the course of the NPP and development of the Danquah-Busia political tradition.

The President stated that the late Tedam, who was until his demise, the Chairman of the Council of Elders of the NPP, was a source of good invaluable counsel and he would miss him dearly.

President Akufo-Addo later announced that the Navrongo campus of the University for Development Studies (UDS) will soon be renamed after the late statesman.

He said steps to make the University autonomous have been initiated and when Parliament processes are complete, the tertiary institution will be known and called the C.K Tedam University of Technology and Applied Sciences.

“The sitting of Parliament, the bill seeking to create and autonomous university out of the Navrongo campus of the University for Development Studies will be laid. Once the parliament processes are completed, it wll be referred to as the C.K Tedam University of Technology and Applied Sciences”.