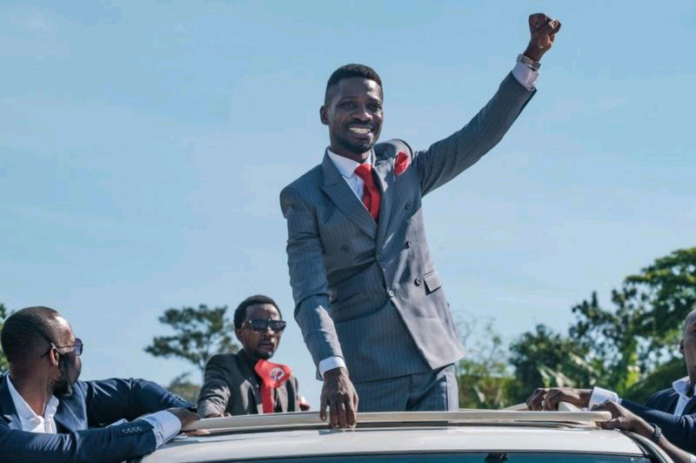 There has never been a peaceful handover of power in Uganda, but pop star-turned-politician Bobi Wine is hoping to change that by unseating long-serving President Yoweri Museveni in Thursday’s vote. BBC Africa correspondent Catherine Byaruhanga takes a look at the challenger.

A few weeks before the general election and what could be the biggest day of Bobi Wine’s life, he brought his presidential campaign to his family’s ancestral home.

The 38-year-old pop star, whose real name is Robert Kyagulanyi, made his reputation in the informal settlements of the capital, Kampala, but here in Kanoni, a sleepy rural town in central Uganda, his support is just as evident.

Hundreds of young people, mostly men dressed in red, seem to emerge from the bushes and gardens and surround his motorcade. Bobi Wine, also known as the “ghetto president”, climbed through the sunroof of his white Toyota Landcruiser and waved at the crowds – they frantically respond.

In an unlikely sartorial move for a presidential candidate, he has started wearing a bullet-proof vest and protective helmet.

In December, a bullet was shot through his vehicle’s windscreen narrowly missing a passenger. Bobi Wine said that he thought his life was in danger.

In Kanoni, as had happened countless times during the campaign, he ran into a police and military blockade – teargas and bullets were fired. The authorities said they were simply trying to disperse crowds and enforce Covid-19 guidelines.

But Bobi Wine believed this was yet another sign of intimidation. He has been consistent in saying that it will not succeed as he feels that he is at the head of a mass movement.

“People are not just following me. People are following an ideal that I represent,” he told the BBC in 2019.

“I did not start it and I will not end it. I’m just one of the millions and millions of Ugandans that want better.”

The manifesto of his National Unity Platform (NUP) party is geared towards basic needs like improving access to healthcare, education, clean water and justice. All of this, the NUP says, can only be done by removing President Museveni from power.

Over the last two decades Bobi Wine’s musical output has been filled with songs about these issues and they have inspired a fervent following.

‘He understands us’
Twenty-three-year-old law student Marion Kirabo is vying to be a local councillor and she is one of his supporters.

“Even before his political life he was someone the youth could identify with,” she says.

“Especially through his music, you could clearly see that he understood the social issues that young people were facing, especially young people from the ghetto.”

When President Museveni came to power in 1986, Bobi Wine was just about to turn four, and living in Kanoni.

18.1m
people have registered to vote

11candidates are running for president

1of the candidates is a woman, Nancy Kalembe

529MPs will also be elected

Bobi Wine’s grandfather, Yozefu Walakira, was part of a different rebel contingent but from time to time during the conflict hosted Mr Museveni in his house.

Walakira died during the civil war after being injured when his home was bombed – an attack which also killed three family members.

Bobi Wine’s family later moved to Kampala, his mother Margaret Nalunkuuma, a nurse, was the main breadwinner and bought land in the Kamwokya slum where the musician lived and built his now world-famous recording studio.

Some of his primary and secondary schools were often within walking distance from Kamwokya.

As a teenager he discovered a passion for the arts, but when he first attended the prestigious Makerere University he started out studying for a social sciences degree. After one semester he switched courses and took on music, dance and drama, earning a diploma from the university in 2003.

‘Campaigning all my career’
In 2017, the reggae star turned his hand to politics as he saw it as the logical next step.

“You know, all through my musical career, I’ve been singing about the challenges that… people go through,” he told the BBC.

“So it’s as if I’ve been campaigning, all my musical career.”

His song Tuliyambala Engule (We Shall Wear the Victor’s Crown) has become one of the campaign’s unofficial anthems.

He won a by-election to become MP for Kyaddondo-East, a constituency to the north of the capital and even though an independent he aligned himself with the opposition. In a series of by-elections he campaigned for candidates who defeated hopefuls from the NRM.

There was a sound of regret in Bobi Wine’s voice when he reflected on his rival’s career in a BBC interview in 2019.

“Why did such a prized revolutionary decide to become one of the world’s most despised dictators?” he asked.

“But it’s also a lesson to many of us, knowing that we are saying what President Museveni was saying when he was in our times. And also to remember that it is only the idea of building strong institutions that can save us from ourselves.”

The comparisons between a younger Mr Museveni – charismatic, energetic and inspiring – with today’s Bobi Wine are hard to escape.

The rebel commander was just 41 years old when he seized power, promising Ugandans security, a stronger economy and a better future.

Some do wonder whether his new challenger full of idealism and populist rhetoric might not make the same mistakes.

Activist Siperia Mollie Saasirabo, 24, who says she is now in “political exile” in Kenya, is disillusioned with Bobi Wine.

In 2019, she became the face of student protests over a fee hike at Makerere University. For that, she was abducted by people she believed were plain-clothed soldiers, badly beaten and left barely conscious.

‘He lacks an ideology’
At the end of that year, she briefly joined Bobi Wine’s party but left because of what she saw as a lack of ideological grounding.

“He was asked about his economic system when he is president,” she says, referring to a July 2020 interview Bobi Wine gave to a local radio station.

“He was asked whether he was on the left or the right of the ideological setting, and his answer was he was neither on the right or the left and he will just use what works. It just does not make sense for me.”

Apart from the large crowds that gather to support him, like the one in Kanoni, it is hard to tell how truly popular he is and whether the cheers will be turned into votes. Data on registered voters and their voting patterns are very limited.

Francis Kibirige, national co-ordinator for the Afrobarometer survey in Uganda, has been carrying out opinion polls and studies in Uganda since 2000.

He says the question remains as to whether Bobi Wine has done enough to transcend opposition politics and chip away at the huge vote that President Museveni and the NRM have gained in previous elections.

He argues that NRM supporters see the party and the president as “the guarantor of peace” and Bobi Wine’s NUP has not done enough to persuade them otherwise.

Just as in most of the previous five elections under Mr Museveni, this one has been marred by allegations of violence against the opposition, press and civil society activists. In November, at least 54 people were left dead after police and soldiers moved in to break up protests over Bobi Wine’s arrest.

In this context there are some who are already questioning the validity of the vote.

Bobi Wine, however, has encouraged people to cast their ballots and says voters should make sure there is no rigging at polling stations.

He is under no illusion that unseating Mr Museveni will be easy. “While we know that we are up against a brute force, we are confident,” he told the BBC in a 2020 interview.