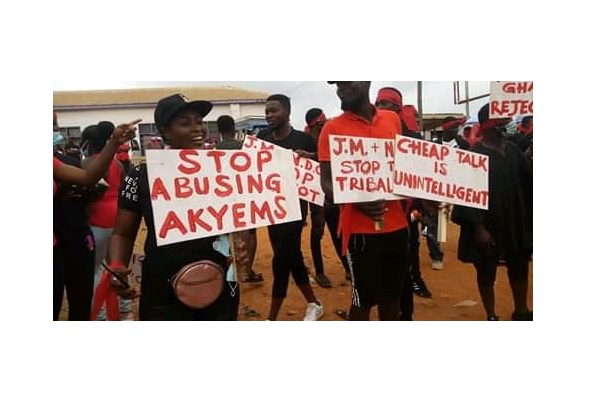 A youth group from the Akyem Abuakwa State in the Eastern region has embarked on a demonstration against National Democratic Congress (NDC) flagbearer John Mahama.

The protesters who have formed the Okyeman Youth for Development converged at Asamankese in the Lower West Akim Municipality of the Eastern Region Wednesday to begin the about two-hour event.

The protest is to register their displeasure against the NDC leader and the MP for Bolgatanga Central, Isaac Adongo, for referring to some political figures who hail from the area as “Akyem Sakawa Boys.”

“We expect thousands of Akyem people to come and support the demonstration,” the convener for the group, Nana Yaw Osene Akwa, had told Accra-based Citi FM in an interview.

Mr. Adongo used the descriptor in a write-up critiquing the Agyapa Royalties deal. The write-up was shared on John Mahama’s Facebook page.

Both politicians have been lambasted over the tag, which has been deemed ethnocentric.

The group in the Lower West Akim Municipality comprises youth and chiefs from Akyem Abuakwa, Akyem Kotoku, and Bosome.

“All the Akyems who are not happy with the comment Mr. Mahama shared on his Facebook wall are coming to demonstrate against him for him to retract and apologize to Okyeman and the three paparamountcies”, Akwa said.

Mr. Mahama’s comments and his subsequent defense of the tag have been condemned by President Nana Akufo-Addo who said: “that is the kind of language we don’t want to defend in politics.”

The President also said he expected more outrage over the comments.

“Sometimes one would hope that when things come out, people will comment on them. The comment made by my opponent, Akyem Sakawa people, I have not heard any public figure in this country or anybody comment on it,” he said last week.