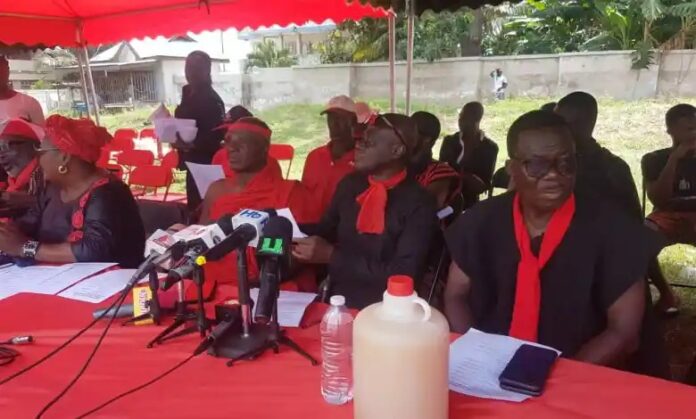 There is growing anger among the inhabitants of Mampong in the Ashanti Region following attempts by state agencies to authorize the destruction of arable lands to mine gold.

The Concerned Citizens of Mampong Against Galamsey, a pressure group in the Municipality has joined the traditional rulers to kick against this move.

The Minerals Commission on November 24 withdrew an application for mineral rights by mining firm Active Target Natural Resources Limited after the Mampong Traditional Council had voiced its objection to any mineral operation or activities on its lands.

“Consequently the Minerals Commission shall no longer receive and/or consider any application for mineral rights in respect of Mampong lands”, the Commission stated in its letter addressed to the Mampong Municipal Chief Executive.

But the pressure group said it was not convinced citing the negative effects of mining in recent times.

Speaking at a press conference on Tuesday (December 7) the president of the Concerned Citizens Against Galamsey, Victor Owusu vowed to support the traditional rulers to resist every mining activity in the area as it poses a threat to their already scarce water supply and farmlands.

“The Environment and water bodies in the Mampong Traditional Area stand the risk of being desecrated by the parcelling out of our lands and rivers for the purposes of filthy galamsey money.”

“Sooner than later such communities will spend all the monies they have gotten from galamsey on food and water. We do not want such a situation in Asante Mampong”, he fumed.

He also urged the Minerals Commission to desist from granting mining permits to companies for gold prospecting on their lands warning of dire consequences.

“We became alarmed when we heard that the Minerals Commission has granted Minerals right to a certain company to come and mine in the Asante Mampong Traditional area. With the benefit of hindsight, we became disturbed and decided to rise up against any form of Minerals prospecting particularly galamsey in Asante Mampong.”

The anti-galamsey group are not in this alone, residents of Mampong also say they are prepared to face off with illegal miners to protect their lands.

Subsequently, the chiefs and people of Benim in the Mampong Municipality joined the call, and have vowed not to allow mining companies and individuals to destroy their farmlands which is their main source of livelihood.

The Queen-mother of Benim Traditional area, Nana Gyamfua Nyarko III warned that any resident found engaging in the act will be banished.