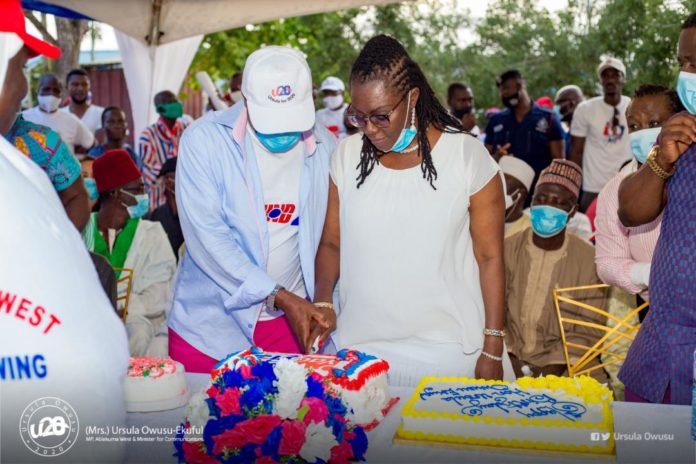 The Member of Parliament for Ablekuma West, Ursula Owusu-Ekuful, has commissioned the refurbished Dansoman Children’s Park to mark her 56th birthday.

The Park, which was constructed some 20 years ago, is located in Tunga a suburb of Dansoman.

Speaking at a ceremony on Tuesday, October 20 to inaugurate the refurbished facility, Mrs. Owusu-Ekuful who doubles as Ghana’s Communications Minister said,

“When I saw the state in which it was in June with the children still playing on the broken rides, some of them injuring themselves, falling down, tearing their clothes…I decided that we look for money…to put it in better shape than it was”.

“Thank God we have been able to do this, fix the playground so we can open it on my birthday for kids to have some fun with me. So, I’m very excited about it. But we are not done yet. We are fixing the entire children’s park. We will have a new baseball, basketball, tennis, and volleyball court as well as an Astroturf for football with proper security and maintaining culture better than it has been in the past,” she added.

Mrs. Owusu-Ekuful who officially filed her nomination forms to seek reelection in the December 7 parliamentary polls earlier this month was hopeful the commissioning of the renovated Park will translate into votes for the governing New Patriotic Party (NPP).

“In the next couple of months, we would have progressed far with the refurbishment of the other bits. And we are hoping this will also translate into a vote for us. For the first time, the two polling stations here who have never voted NPP have assured me that in 2020 Tunga has fallen for the NPP,” she told the enthusiastic crowd.

Ghana’s politics has strong ties with performing arts. This is how...