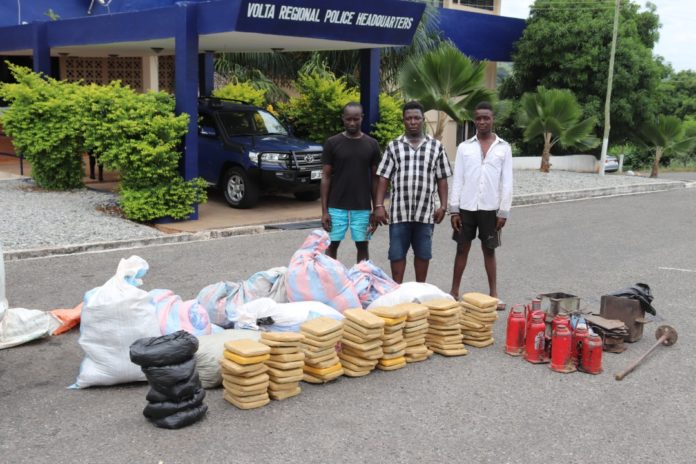 A special police operation has led to the arrest of a gang of three for processing Indian Hemp at Ve-Koloenu in the Afadzato South District of the Volta Region.

The suspects have been named as George Agidi, 30, also known as ‘Doctor Aggrey’, Adam Razak, 31 and Isaac Nunekpeku, 17, all arrested on May 07, this year.

He said a total of eight sacks of the compressed Indian Hemp and tools including seven heavy-duty car jacks and a special purpose metal fabrications used in molding the slabs were also seized.

Mr Dogbatse indicated similar exercises would be replicated in other parts of the region to reduce incidents of violent crimes considered products of narcotics use.

He assured the public of the commitment of the Command to deliver on its mandate urging it to assist the Police with leads into criminal activities.

A/R: Tenant kills landlord who complained of noise-making at his apartment

V/R: Suspect caught cutting off his manhood in police cell