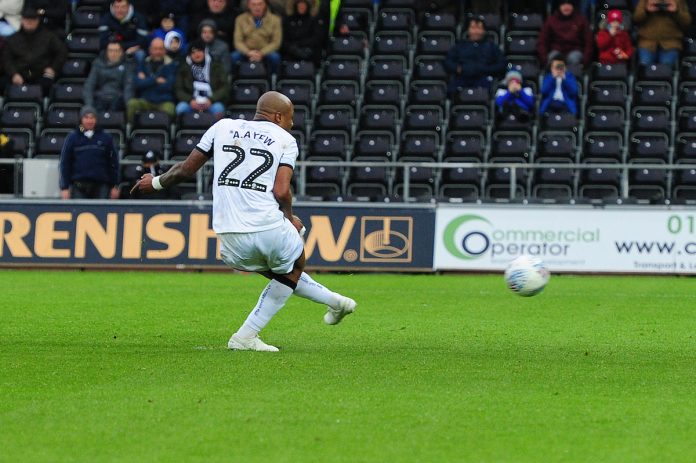 The deputy skipper for Swansea netted his sixth and seventh goals of the season for the Black and Whites against Middlesbrough.

The visiting team went behind inside 22 minutes when the Ghanaian was fouled in the box and converted the resulting spot kick expectedly to make 1 – 0 to the home side.

The fully action packed first half ended with the home side leading by a lone goal scored by Ayew on the 22nd minutes from the spot.

Former Rangers FC marksman Marcus Tavernier equalized for the home team 14 minutes after the recess to make it one all.

Substitute Marcus Browne was sent off three minutes after the hour mark reducing the visitors to 10-men with 27 minutes left on the clock.

Swansea made good use of their numerical advantage as the piled an excessive pressure on Middlesbrough after the red card incident.

The home side’s enormous pressure paid off with 19 minutes left to play when Ayew received an incisive pass from Bersant Celina on the edge of the box to smash home his second of the day to put Swansea in a driving seat.

Two minutes after going in front for the second time in the match, Sam Surridge secured the points for Swansea by making it 3-1 with a fine finish.

Swansea ended their six games winless run in the championship after beating Middlesbrough 3-1 at the Liberty Stadium.