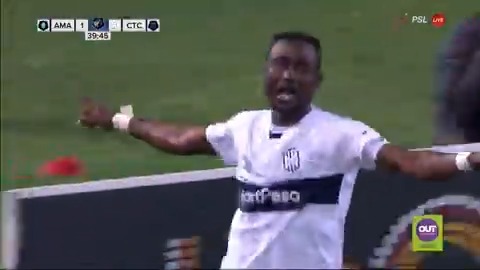 Former Medeama hitman Prince Opoku Agyemang scored his first goal of the season for Cape Town City in the PSL in South Africa on Saturday.

The 28-year-old striker had played four matches in the South African top-flight before opening his goal account in today’s game against Amazulu FC on the road.

Lehlohonolo Michael Majoro broke the deadlock of match from the spot on the 4th minute of the match to put the hosts 1-0 up early in the game after a blistering start to the match.

The Ghanaian striker,Opoku grabbed the equalizer for the visitors on the 40th minute with a powerful strike from just inside the box to help his side pick a point at Amazulu after 1-1 stalemate.

Opoku Agyemang has a goal in four games in the South African top-flight since his move from Medeama SC to the Cape Town club.